Around half way through the film Edward (Nicolas Cage) is told that the girl he is searching for is actually his daugher. He searches all over Summersisle (Ellen Burstyn) looking for her on May Day before the sacrifice of his daughter. He can not find her. But on his return to the Inn he confronts and knocks out Sister Beech and Sister Honey (Leelee Sobieski) and stealing her costume for the sacrifice.

When with the Islanders during their ritual dance along their path Edward is led to Rowan. He saves her and both of them run throught the forest but they end up facing the Islanders and here we are told that everything he did and saw while on the Island was set up by them because they the right kind of sacrifice to insure a good harvest the next year.

Here it is explained that they needed a stranger to come to the Island but they must have a connection here. A connection of blood (Rowan. Father-Daughter) Unlike the orignal where they needed a king, fool, virgin ETC.

Also that they have been prepared for this day for many years and they have many poeple who have been choosen already to be sacrificed if a future harvest is to fail. Also it is reveled that Sister Summersisle is the mother of Willow Woodward. Now he is taken by force by the people of the Island.

Here it shows the crowd of people taking Edward to The Wicker Man. It is heard in a voice over during this Edward telling them it is murder and that killing him would not help their honey and that he doesn’t believe in this stuff. We also hear him having his two legs brokenbut we never see it or him being put into a helmet of bees.

He is then pulled into the head of The Wicker Man and his daughter Rowan is the one sent up to light it on fire. The people of Summersisle shout repeatedly “The drone must die! The drone must die!” While Edward is screaming for his life. He dies and the head tips over onto the camera.

It cuts to a scene in a city 6 months later. Two guys in a bar are looking to pick up some women and they come across Sister Willow and Sister Honey. Willow goes to get drinks with one of them leaving Honey to talk with the other one. We find out he is becoming a cop just like Edward was. Honey repeats a line from eariler in the film which she said to Edward. He says after this he is going home and she says “When you go willl you take me with you.” Leading the audience to believe that he is going to father a child with her and then run away like Williow did with Edward and when the crops fail he will be the next sacrifice.

(This is a remake of The Wicker Man from 1973, which has now become a Cult Classic)

Thanks “The Don Vito” 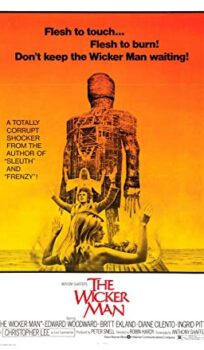