Joan Castleman (Glenn Close) is the wife of Joe Castleman (Jonathan Pryce), who has just been awarded the Nobel prize for literature.

Joan stands dutifully at his side while everyone calls him a genius, but a biographer, Nathaniel Bone (Christian Slater) confronts Joan with a theory: that she is the true writer of all of Joe’s great works.

Flashbacks confirm this is true: Joan, in the sixties, felt there was no way she could get published or read as a female writer, so she offered to write and let Joe take the credit.

In the present, it all becomes too much to bear, and after the Nobel prize ceremony, she tells Joe she is leaving him, tired of the charade, his affairs, and watching him take all the credit. They have a huge fight during which Joe has a heart attack, and after asking Joan to tell him she loves him, he dies.

Joan tells Nathaniel that she will sue him if he publishes his theory, and vows to tell her children the truth. 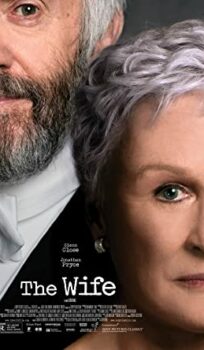