A motorcycle gang disrupts a legitimate motorcycle race.  The gang leader, Johnny (Marlon Brando) steals the trophy.  When they see the police preparing for action, they ride off.  They arrive in a small town.  The police chief (Robert Keith) is a small timid man.  He lets the gang run wild, drag racing down the main street.  A rival gang, led by Chino (Lee Marvin) arrives.  Johnny and Chino are fighting in the middle of the street.  A middle aged man from the town, Charlie, tries to drive his car slowly through the main street, honking continuously, to break up the fight and drive the gang out of the street.  Chino pulls Charlie out of his car and starts beating him.  The police chief finally arrests Chino, while pleading with Johnny to leave town.

Johnny falls for the waitress in the diner, and decides to stay in town.  The gang break into the jail and free Chino.  The gangs are going wild at night, breaking windows and vandalizing the town.  Johnny takes the waitress, who is the police chief’s daughter, on a motorcycle ride in which he is aggressive and angry.   Charlie gathers a group of town men to confront the gang.  They capture Johnny and beat him.  Johnny escapes and takes off on his motorcycle.  Charlie throws a tire iron, which hits Johnny and makes him lose control.  The motorcycle hits and kills an old man.

The county sheriff shows up with several deputies, and restores order.  They arrest Johnny and are going to charge him with killing the old man.  The police chief and his daughter testify that Johnny was hit with a tire iron, and did not cause the crash.  The sheriff lets Johnny go. (Apparently, they are willing to overlook the broken store windows, looted stores and other vandalism.)  Johnny gives her the trophy and ride out of town. 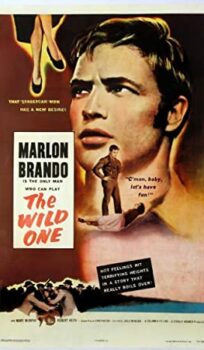