Eden Pedecaris (Candace Bergen) is an American widow traveling in Morocco with her 2 children.  They are kidnapped by Mulay Ahmed Muhamed Raisuli the Magnificent, Lord of the Riff, Sultan to the Berbers, the true defender of the faithful (Sean Connery).  Raisuli is trying to overthrow the sultan, his nephew, and the bashaw, his brother, who rule the country.  Raisuli thinks they are too deferential to the western powers, and are abandoning their traditions.  Raisuli hopes to use the kidnapping to get America to remove the bashaw and the sultan.  Theodore Roosevelt seizes on this as a campaign issue, demanding “Pedecaris alive or the Raisuli dead”.

American marines take the bashaw prisoner, forcing him to accept Raisuli’s demands.  An exchange is arranged, and Raisuli brings Pedecaris and her children.  However, the Raisuli is betrayed and taken prisoner by the Moroccans and their German allies.  The marines are initially indifferent, but Pedecaris convinces them that if Roosevelt guaranteed Raisuli’s safety, that promise must be kept.  The Americans and Berbers fight together and free Raisuli.  Pedecaris and her children return to America.

With Pedecaris free, Roosevelt is confident of re-election.  The movie ends with him reading a letter from Raisuli:  To Theodore Roosevelt – you are like the Wind and I like the Lion. You form the Tempest. The sand stings my eyes and the Ground is parched. I roar in defiance but you do not hear. But between us there is a difference. I, like the lion, must remain in my place. While you like the wind will never know yours. – Mulay Hamid El Raisuli, Lord of the Riff, Sultan to the Berbers, Last of the Barbary Pirates.

Very loosely based on the true life Pedecaris incident in 1904.  However, in the real incident Ian Pedecaris was a man. Pedecaris was Greek, and was not an American citizen- a fact that was kept secret as the US wanted the excuse to intervene in Morocco. 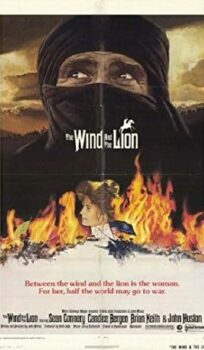