Pooper:
The witch kills all of Tomasin’s family. The family goat, Black Phillip, is revealed to be Satan. Tomasin signs her soul to the devil and the film ends with her celebrating with a coven of witches and embracing her dark powers.

Long Ending:
The film takes place in 1630 with all actors speaking in an old English dialect. We open in a Puritan community where William (Ralph Ineson) and his wife Katherine (Kate Dickie) stand before the village elders. William condemns their community and claims to be more pious than all those in the town. The elders decide to banish William and his family, a decision he wholeheartedly embraces. William and Katherine venture into the wilderness with their children, including eldest daughter Thomasin (Anna Taylor-Joy), eldest son Caleb (Harvey Scrimshaw), and twins Mercy and Jonas. About a day’s journey outside of the village, they eventually reach an idyllic piece of land bordering a brooke and the forest. The family praises god and begin to build their new home.

We jump ahead in time. William has built a house and his new son Samuel is an infant. Thomasin is praying to god to forgive her of her sins (including masturbation) and Caleb is stealing curious glances at his sister’s body. They own a horse, dog and two goats. One goat named Black Phillip is very aggressive and Mercy and Jonas claim he talks to them. Things aren’t going well as their crops are spoiled and William can’t manage to trap or successfully hunt any of the critters in the woods. Things get worse when Samuel disappears while Thomasin is watching him. The loss particularly affects Katherine, who blames Thomasin for their loss. We witness a witch living in the woods with Samuel. The witch butchers the baby and rubs its blood on her body.

Things go from bad to worse as the family unit breaks down. Thomasin teases Mercy, claiming she is a witch. Katherine wishes to return to the village and marry Thomasin to another family. Many lies that William have told his family are exposed. Caleb and Thomasin go into the woods to try and hunt for meat (believing a successful expedition will help calm the family). Instead, their dog is killed off-screen by the witch, the horse runs away and Caleb disappears (the viewer sees him finding the witch in full seductress mode and Caleb cannot refuse her advances).

That night, Thomasin finds Caleb naked and near death. Katherine again begs to return to the village (or even back to England). Later Caleb begins having convulsions, supernatural occurrences plague him and Mercy and Jonas begin speaking in tongues. The family pray over Caleb and he screams out (in an erotic manner) a prayer to god before dying. After Caleb dies, Katherine and Mercy accuse Thomasin of being a witch and Thomasin claims it is Mercy and Jonas who are witches. Not knowing what to do, William barricades the three remaining children in the barn with the remaining goats. He vows to set off on foot for the village the next morning and howls to god to punish him for his sin of pride, but to spare his family.

That night, the three children awake to witness the witch eating one of the family’s goat (not Black Phillip). She then attacks Mercy and Jonas. In the night, Katherine sees ghosts of Caleb and Samuel. She allows Samuel to nurse from her, though the viewer sees it is actually a raven pecking at her breasts. When William awakens, he goes outside to find the barn destroyed, Mercy and Jonas missing, and only Thomasin remaining. Before he can react, he is attacked and fatally gored by Black Phillip, after which, the goat begins walking on its hind legs. Katherine surveys the scene and then attacks Thomasin and begins strangling her to death. Having no choice, Thomasin stabs her mother to death.

At night, Thomasin approaches Black Phillip and begs that he talk to her as he talked to Mercy and Jonas. To her surprise, Black Phillip does indeed talk (and also shifts shape into a man, most likely the Devil). He promises Thomasin great power and world travel if she will sign her soul to him. She initially objects, but eventually agrees. 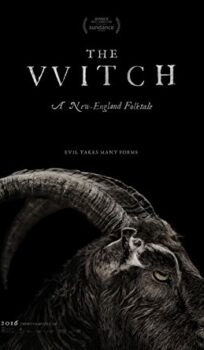