Larry Talbot (Lon Chaney) returns to his home in Wales to live with his father John Talbot (Claude Rains).  Larry buys a walking stick with a silver werewolf emblem.  When a girl is attacked by a beast, Larry beats the beast to death with is walking stick.  A gypsy fortune teller informs Larry that the beast was her son (Bela Lugosi), a werewolf.  Since it bit him, Larry will now become a werewolf.  Under the full moon, Larry turns into a werewolf, and kills a villager.  When he returns to human form, Larry is haunted by shadowy memories of his actions as a wolf.

As the wolf man, Larry attacks Gwen.  Larry’s father beats the beast to death with the same walking stick.  To the father’s horror, the dead beast turns back into Larry. 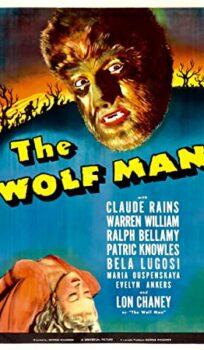