Professor Wanley (Edward G. Robinson) meets the woman (Joan Bennett) who posed for the portrait in the window. While at her apartment he gets into a fight with her lover, Wanley kills him, and gets rid of the body. One of his best friends is the D.A. and is very involved in the case. Wanley causally gets him to talk about the investigation over dinner. Fearing that the evidence will point to him, Wanley is desperate trying to hide that fact that the killer is him. The murdered socialite hired a bodyguard months before he was killed by Wanley, The bodyguard then blackmails Wanley and the man in the Window. They try to poison him, but that fails so in another fight they kill the bodyguard. The waiter from the social club is seen waking Wanley up at 10:30, the time he met the woman in the window.

It was all a dream. The murdered socialite is actually the Hat check clerk at the club. 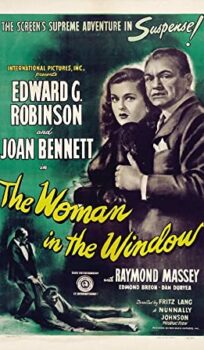