Henry Orient (Peter Sellers) is a famous concert pianist, who devotes his free time to seducing the women who attend his concerts.  Marian Gilbert and Valerie Boyd are classmates in a private school for rich troubled kids.  Marian’s parents are divorced.  Val is raised by a nanny while her wealthy parents travel constantly.

When they attend one of his concerts, the girls discover that Henry Orient lives near them in Manhattan.  They become obsessed with Henry Orient, spying on him in his home and following him about.  Val makes a scrapbook full of news clippings about him, pictures, and fake letters from him, which she wrote herself.  Val’s mother, Mrs. Boyd (Angela Lansbury) finds the scrapbook.  Mrs Boyd confronts Val, and Val runs away.

Mrs Boyd goes to Henry Orient’s apartment.  He is able to show her that the letters are fake and he did nothing with her daughter.  However, he seduces Mrs Boyd (who is habitually unfaithful to her husband).  The girls are spying and witness Mrs Boyd’s infidelity.  Later, when the Boyd’s are all home, Mrs Boyd’s actions are inadvertently revealed by phone calls from the people who have been searching for Val.  Mr Boyd (Tom Bosley) regrets the way they have raised Val.  He dumps his cheating wife and takes Val on a 3 month tour of Europe.  When they return, Mr Boyd and Val go to visit Marian.   There appears to be interest between Mrs Gilbert and Mr Boyd, indicating the girls may get a family. 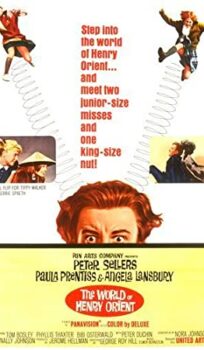