After a particularly brutal match that includes a ladder, a table, a metal folding chair, a trash can, an artificial leg wrapped in barbed wire, insecticide and a staple gun, Randy “The Ram” Robinson (Mickey Rourke, in an Oscar-worthy performance), an aging, former superstar professional wrestler in the1980’s, has a heart attack.

He is forced to retire after undergoing bypass surgery and while working in a deli, he tries to reconnect with his estranged daughter Stephanie (Evan Rachel Wood) and build a relationship with aging stripper, Cassidy (Marisa Tomei).

Randy has enough self-awareness to see the bleak future ahead of him as he signs autographs at small gatherings of aging, disabled wrestlers, lives alone in his trailer and struggles to recover from his bypass, but he cannot change who he fundamentally is.

Randy parties too hard one night and sleeps through a dinner date with his daughter, who ultimately disowns him. During a bad day at the deli, he is recognized by a fan and in frustration, Randy punches the meat slicer, cutting his hand open. He quits in a fit of rage and agrees to wrestle his old arch-rival “The Ayatollah” (Ernest Miller), even though Randy knows the match could be fatal.

Cassidy drives to the arena, confronts Randy as he’s about to go out to the ring and tries to convince Randy to leave with her and not go through with the match. Randy admits that he can’t live without the adulation of the fans and Cassidy leaves the arena after Randy gives a passionate speech to the crowd prior to the match. Randy and The Ayatollah put on a great show, until Randy is stricken with chest pains. Randy struggles to the stand on the top rope of one corner of the ring and leaps off towards the prone Ayatollah, who is throwing the match for Randy.

The screen goes black and Bruce Springsteen’s song “The Wrestler” plays over the end credits. 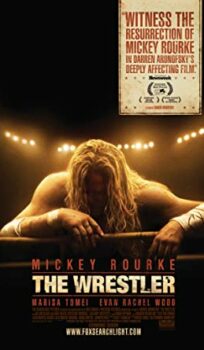