The killer (Colm Feore) kidnaps Nelson (Dave Foley) and Lynn (Jennifer Tilly) when they are near the Mexican border escaping the authorities, and while he forces them to take him to Mexico with them, the killer shows a composite sketch of himself in a newspaper to Nelson, and Nelson now realizes the police are not after him like he thought, and the killer now knows Nelson is not after him.

The killer takes them to an amusement park, where they are brought inside a Statue of Liberty decoration on a mini-golf course, and they meet up with Ken (Dave Redican), Nelson’s co-worker who paid the killer to kill their boss. The killer is paid and is given an Iraqi passport instead of a Swiss one (Ken said that his company had no Swiss passports), but then Ken turns traitor on him, pulling a gun on him and shooting his gun out of his hand. Nelson, thinking Ken was going to save them (he wasn’t), ends up distracting him with his stupidity, giving the killer the opening to retrieve his gun and shoot Ken dead.

The police soon show up, so the killer has Nelson & Lynn climb to the top of the Statue of Liberty decoration. He gets into a standoff with the police, holding Nelson and Lynn hostage so the police would have to negotiate with him, but Nelson and Lynn rather stupidly fight back and soon cause him to take a short fall off the edge of the decoration, where he is arrested on the ground.

Nelson tells Lynn he’ll stay with her in the small town she lived in instead of going back to Cleveland, give his $1,000,000 reward for capturing the killer to Lynn’s father to save his bank from foreclosure, and that he’ll marry her. They kiss, and then Lynn has another one of her narcolepsy spells. 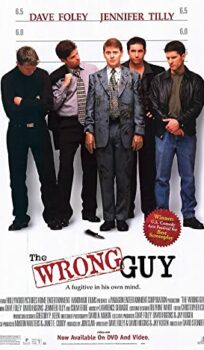