Fox Mulder (David Duchovny) and Dana Scully (Gillian Anderson) are no longer with the FBI but are intimately involved.  Scully is a doctor at a local hospital and Mulder has isolated himself in their house in W. Virginia, obsessing over news articles that could be linked to his quest for “the truth”.  Mulder is asked to return to the FBI by Agent Whitney (Amanda Peet) to consult on a missing persons case involving another agent.  A fallen priest (Billy Connolly as Fr. Joseph) claims to see visions of the missing agent and Mulder is brought in to verify his claims of psychic visions.

While Mulder becomes increasingly involved in the case, Scully finds herself pulling away from him and the case, immersing herself instead in saving one of her young, terminally ill patients.  Mulder and Agent Whitney catch a break in the case which leads them to possible illegal trafficking of human organs.  While the two pursue a Russian suspect, Agent Whitney is caught off guard and is thrown to her death.

Mulder carries on without Whitney and finds himself following the Russia organ trafficker to his hideout in W. Virginia.  Injured from being pushed off a snowy bank while in pursuit, Mulder finally infiltrates the Russian’s hideout, which is set up as a operating room. There he finds what is really going on – the Russians have kidnapped female victims and are actually doing experimental limb and organ transplants on both animals and humans.  The Russians get the upper hand on Mulder and prepare to execute him.  Meanwhile, Scully, concerned that Mulder had disappeared, called on AC Skinner (Mitch Pileggi) for help and the two follow clues that lead them to the Russians.  Scully saves Mulder and one of the vicitims (but the missing agent is killed) and the Russian doctor is turned over to the authorities.

In the end, Fr. Joseph dies of lung cancer, Mulder goes back to his quiet life with Scully, and Scully makes a decision to pursue a radical cancer treatment to save her young patient’s life. 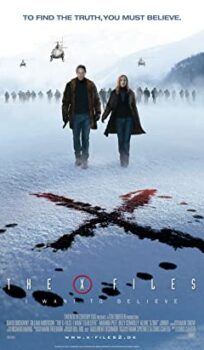