Short pooper:
Seeing no other way out and understanding they would both be inevitably doomed if caught by the authorities, Thelma (Geena Davis) and Louise (Susan Sarandon) make the joint decision of committing suicide by driving together straight through, and jumping over, the cliff of the Grand Canyon, preferring to die as free women.


Longer version:
After the incident in which Thelma and Louise get their revenge on the obnoxious truck driver (Marco St. John) who repeatedly ran into them on the road and made lascivious gestures and comments towards them both, by blowing up his tanker truck when he told them off and refuse to apologize for his crass attitude, the situation becomes extremely dire and hopeless for the two friends. The authorities catch wind of this and, having been hot on their trails due to the fact that, by this point, they were both considered armed and dangerous and were wanted for homicide -never mind that, in all fairness, the guy was a rapist who tried to hurt Thelma- and armed robbery, the pursuit becomes more hardcore.

Despite the women trying to stay off the main roads, soon enough, patrol cars and helicopters catch up with them. Thelma’s self-absorbed and abusive husband, Darryl (Christopher McDonald), is seen one last time, looking despondent and saddened -although, probably, more because of how he felt this whole situation would reflect on him than out of concern for his wife-. The final chase leads them all to the edge of the Grand Canyon, in Arizona. For a brief moment, while they are still alone and believing they could still be safe, the friends admire and comment on the beauty of the place and the worthiness of their crazy adventure; yet, their moment is cut short when a helicopter rises in front of them, from below the canyon, and a massive contingent of patrols close in on them both, from behind. Leading the capture effort are compassionate Detective Slocumb (Harvey Keitel) -who had been understanding to the women’s predicament from the beginning and was still trying to convince them to surrender, but, this time, was shut down from a last chance- and unsympathetic FBI Agent Max (Stephen Tobolowsky) -who was all but convinced they were hardcore criminals who needed to go down for what they did-.

When it becomes clear there will be no coming clean off this mess and that they will both be either jailed for life, or even possibly executed, Thelma convinces Louise to “just keep going” (off the canyon’s cliff, that is). Louise incredulously hesitates but then agrees. They seal their fate and decision of dying free with a tender, bittersweet kiss, hold hands and Louise steps on the gas, as Slocumb desperately runs to try to stop them. As they jump aboard the car, over the edge, to their deaths, the Polaroid picture they had taken together at the beginning of their trip is seen flying off into the wind.

The theatrical version of the movie ends with a freeze-frame of Louise’s car, in mid-air, the screen fading to white and a brief montage of earlier shots of Thelma and Louise, when they happily started their adventure together, days before. However, there is also an extended version (not seen in theatres) that actually shows the car plunging deep down towards the bottom of the canyon, while Slocumb comes to the edge and contemplates, upset that he failed to prevent the tragedy; followed by a shot of the backroads, with the car driving on it, into the distance. 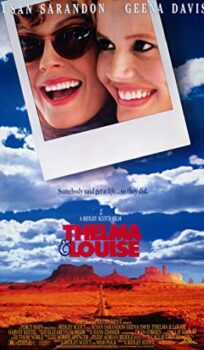