Thelma (Eili Harboe), a college student and devout Christian, has led an intensely sheltered life. Her helicopter parents, Trond (Henrik Rafaelsen) and wheelchair-bound Unni (Ellen Dorrit Petersen) call her every day and want to know her whereabouts at all times. Despite this, Thelma manages to engage in rites of passage for youths newly on their own: drinking, smoking, swearing and discovering their first love/lust.

Thelma is attracted to Anja (Kaya Wilkins) with an intensity so fierce that its repression causes grand mal seizures. Not only that, but they manifest as a superpower. What Thelma wants, she gets. Terrified of her feelings for Anja, she makes Anja disappear through the power of her subconscious mind.

After testing negative for epilepsy at the hospital, Thelma discovers that her maternal grandmother had the same sorts of seizures and manifestations. Unfortunately, Grandma is also a catatonic patient at a psychiatric hospital. When Thelma’s seizures get worse, she comes home from college only to find out the truth: She had unwittingly imprisoned her baby brother in a frozen lake at the age of six, killing him when she felt the withdrawal of her parents’ love. Her father Trond plots to drug Thelma into catatonia once he finds out she is a lesbian and hates him for imprisoning her in more ways than one. Once, he held her hand over a burning candle to symbolize Hell.

The film ends with Thelma drowning her father as he’s fishing out on the same lake in which her brother froze. She also gives her mother, Unni, the power to walk again after Trond dies. She returns to college and reunites with Anja, who takes up with her as if their relationship had never faltered. 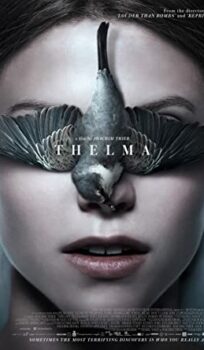