Adam (Noon Orsatti) and Oliver Rex were killed by Edge (Stephen McHattie) and the Zapheads because they were going to tell the cops about Kane’s (Armin Mueller-Stahl) plot of creating a “new Eden”: He saw the human race as a failed species, so he intended to launch a rocket that would explode in Earth’s atmosphere, creating a blanket of smoke and debris that would block out the sun and start a new Ice Age, killing everyone and everything. Kane, Edge, and Dr. Shade (Juliet Landau) would survive it by cryogenically freezing themselves, along with a bunch of plants and animals they had collected, and once the Ice Age ended, they would awake and create a new paradise with what they collected.

Kane has the Zapheads kidnap Teddy Rex’s love interest Molly Rex, as well as Katie’s friend Sebastian (Tony T. Johnson), so he could lure Teddy and Katie to his complex. Shortly after they arrive, Kane has the Zapheads take Katie away to be imprisoned, and then he launches the rocket. Kane shows Teddy the cryogenically frozen Molly, and before leaving with Edge for one of his sleep chambers, he orders Dr. Shade to freeze Teddy as well so he can have his pair of Rexes for his paradise.

However, Teddy gets the better of Dr. Shade, putting her in his cryo chamber, and he frees Molly. Katie gets the better of the Zapheads and frees Sebastian. Soon after the four reunite, Kane and Edge return, and Katie is shot several times, damaging her systems and immobilizing her. With her encouragement, Teddy goes after them, and after spotting them driving off in a jeep to their sleep chambers, he gets some rope and makes a grappling hook, which he uses to hook Kane’s car seat and pull him out of the jeep. The jeep crashes into a billboard, killing Edge. Teddy puts Kane under arrest, then takes his remote and blows the rocket before the time runs down, saving the Earth.

Teddy is promoted to Detective 1st Class for his heroism, fully realizing his dream of becoming a cop, and he selects Katie to be his full-time partner. 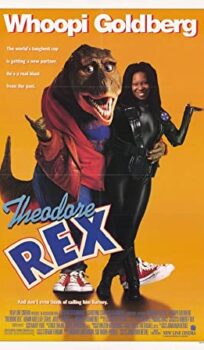