Several meteors fall near a small town.  A plague breaks out, where people develop blood spots, then die.  Scientists are sent to investigate.  The scientists began to act very strange.  They spend huge amounts of money on odd supplies, set up an armed sealed compound, and begin building structures.  One scientist, Curtis Temple, gets there late, due to a recent injury where a metal plate was placed in his skull.  He is immune to the influence, and begins investigating the others.  He realizes that something in the meteors is controlling the minds of the others, but the metal plate blocks the effect.  He recruits help, and makes metal helmets to protect his friends.  They return to the base.  They see that the others built a rocket.  They stow away on the rocket to the moon.

On the moon, they meet members of an alien civilization.  The aliens crash landed on the moon.  Using mind control, the aliens recruited the scientists to build the parts they needed and bring them to the moon.  The people with the plaque were not really dead, just in suspended animation.  On the moon, they will be the workers needed to repair the alien craft.  The aliens just want to fix their ship and get home  Since Temple and his friends are in the way, the aliens intend to kill them.  Temple’s group pull guns on the aliens, and the aliens pull their ray guns.  Temple tells the aliens that if all they want is help getting home, they only needed to ask and earth would help them.  The aliens promise that if the humans will help, the aliens will bring them all back home to earth.  Temple and the Master of the Moon shake hands on it. 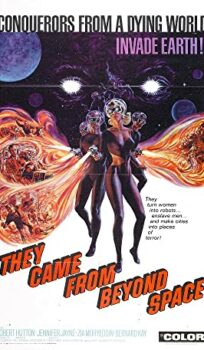