Custer (Errol Flynn) is vain and presumptuous when he arrives at West Point.  He offends many with his showing off, disregard for rules and terrible academic performance.  However, he is adept at meeting and buttering up the right people.  The civil war breaks out, and everyone at West Point is being graduated early and sent into the field. Custer is so poorly regarded by his superiors that weeks go by without him being given an assignment.  In a restaurant, Custer befriends the top union general, Winfield Scott.  With Scott’s influence, Custer gets his choice assignment, with the 2nd cavalry.

Due to a clerk’s mistake, Custer’s name is put on the wrong orders, and he is promoted to Brigadier general and put in charge of the Michigan cavalry, just before the battle of Gettysburg.  Custer instructs the officers under him to disregard the orders from headquarters, and follow him.  Headquarters realizes that Jeb Stuart’s confederate cavalry is unopposed and can flank the union lines.  Custer, riding towards the sound of gunfire, is right in Stuart’s path.  Custer’s small force launches an attack.  Stuart believes they must be the front of a much larger force, and retreats.  Custer’s insubordination makes him a hero.

After the war, Custer is put in command of the 7th cavalry. They are busy fighting the Sioux, led by Crazy Horse (Anthony Quinn).  Custer treats the indians in a fair and decent manner.  Through Custer, the US government guarantees the indians the right to their sacred land in the Black Hills.  Throughout his time at West Point and in the Army, Custer has had trouble with Ned Sharp.  Sharp is rich, spoiled and corrupt.  He runs a company that tries to sell rifles to the indians, whiskey to the soldiers etc.  He and his father want to open the Black Hills to make money there.  They know Custer will enforce the treaty and not let anyone in.  They make false reports of gold in the Black Hills, knowing that the cavalry will not be able to stop a gold rush.

All the indian tribes unite to protect the Black Hills.  Infantry troops are sent in.  Custer knows that the infantry will be slaughtered by the indians on horseback.  Custer knowingly leads his men to certain death against the much larger indian force to allow the infantry time to return to safety.  Custer and all his men die in the battle of Little Big Horn. 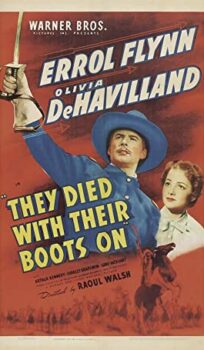