James Caan is a professional jewel thief who is recruited by a mob boss (Robert Prosky) to pull big scores.  Caan agrees thinking that this will enable him to achieve the American dream.

He goes to L.A. to pull off a big heist using an oxy lance to break into a vault loaded with diamonds.  Prosky then withholds Caan’s full cut claiming he invested it for him.  Caan demands his full cut but Prosky informs Caan that he owns him.

Caan then sends his wife away, blows up his own home and businesses, invades Prosky’s home and blows him away.

Caan is last seen walking down the street away from the carnage. 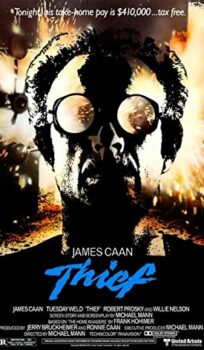