Pete (Paul Rudd) and Debbie (Leslie Mann) have been keeping important secrets from each other. Debbie is unexpectedly pregnant and afraid to tell Pete about it.

Meanwhile, Pete’s record company is floundering, on the verge of bankruptcy. He spent a lot of money to produce a big comeback album and concert for the aging British band Graham Parker and the Rumour (played by themselves), but the album is a flop. Pete knows the only way to avoid going broke is to sell their house, and he doesn’t want to tell Debbie that.

All the secrets are revealed and things come to a head at Pete’s birthday party. He furiously storms out and goes riding away on his bike. Debbie has a big argument with her father Oliver (John Lithgow), who had abandoned her and her mother when she was young. She tells him how much she resented him, and he admits that life with his new family is a mess. He reveals that he’s never known how to be a good family man, and keeps emotionally distant because things seem to go better for people when he’s not around. Debbie and her Dad make a connection through this argument, and she persuades him to stay at her home and watch her daughters while she looks for Pete. Pete’s mooching dad Larry (Albert Brooks) comes with her. Her Dad bonds with Leslie’s daughters, and watches the final episode of the TV series Lost with them

The angry Pete crashes into a car, then gets into a heated argument with the driver, who beats Pete up. Debbie finds Pete and drives him to the hospital. At the hospital, Pete’s Dad gives Leslie some surprising emotional support and unexpected compliments. He assures her that she and Pete have a strong marriage and are a perfect fit for each other.

When Debbie sees Pete, she tells him that they’ll be fine financially, as she’s willing to sell their house. Pete apoologizes for his behavior, and seems delighted about the new baby.

Since Pete’s party was no fun at all, he and Debbie make up for it by going out to see some live music. They watch alternative country singer Ryan Adams, and talk about trying to sign him to a contract with Pete’s record label. 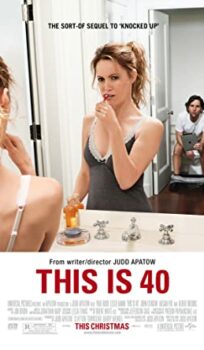