Long version:
Both FDR and Tuck spy on each other and Lauren — using CIA resources — as they try to win her affections. She likes both men, and can’t decide who she would rather be with. Lauren decides to have a “sex tiebreaker”; although FDR and Tuck had agreed to no sex until she had definitely decided. Despite the spies sabotaging each other, FDR sleeps with Lauren, and it’s implied Tuck manages to do the same later. Meanwhile, all the competition between FDR and Tuck has broken their friendship, and they no longer want to be partners.

After talking with her friend Trish (Chelsea Handler), it seems Lauren has made a decision and plans to meet with Tuck. At the same time, FDR gets the information that Heinrich, the international criminal they’ve been hunting, is in L.A. for revenge against the two spies. When FDR goes to Lauren and Tuck’s meet up to warn him, both men get into a fight and Lauren learns that both the men she’s been dating know each other.

Heinrich shows up and kidnaps Lauren and Trish, but FDR and Tuck are able to quickly save them. In the commotion of the final confrontation — which ends with Hienrich being killed — everyone finds out Lauren’s choice is FDR.

The men reconcile, and Tuck gets back together with his ex-wife who now knows he is a CIA agent. Sometime later, we see FDR and Lauren are engaged. While on a mission, FDR admits to Tuck that he slept with Tuck’s wife sometime before Tuck had met her, so they’re “even” (since they also both slept with Lauren). However, Tuck admits that he never slept with Lauren, and the film ends with the two spies getting into another fight. 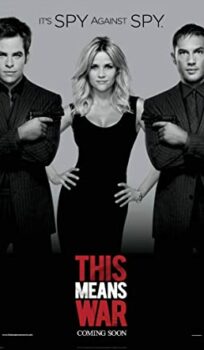