Since his last adventure, Thor (Chris Hemsworth) has gotten back into shape and fights alongside the Guardians of the Galaxy. He faces a new threat in the form of Gorr the God Butcher (Christian Bale), who believes all gods are arrogant and selfish, and therefore must die. Thor teams up with Korg and Valkyrie, plus his ex-girlfriend Jane Foster (Natalie Portman), who now wields Mjolnir since it is the only thing protecting her against her stage 4 cancer.

The team tries to get help from other gods like Zeus, but they refuse to help. Thor fights Zeus and takes his lightning bolt before going off to find Gorr, who has kidnapped the Asgardian children to lure Thor to him. Gorr is trying to use Thor’s ax Stormbreaker as a portal to the being known as Eternity, who can grant Gorr the wish to eliminate all the gods at once. Gorr gets Stormbreaker, and Thor tells Jane she cannot continue joining him because her prolonged use of Mjolnir is killing her faster.

Thor nearly gets beaten by Gorr until Jane shows up, and they even get help from the Asgardian children. Thor and Jane destroy the Necrosword (Gorr’s god-killing weapon that corrupted him and is killing him), but Gorr manages to summon Eternity. Thor convinces Gorr that what he really wants is love. Thor stays by Jane’s side as she dies, and they reaffirm their love for one another. Gorr uses his wish to see his daughter again before he dies, and he asks Thor to look after her.

Jane is remembered as a hero and legend, while Thor raises Gorr’s daughter (named Love) and fights alongside her. Meanwhile, Zeus sends his son Hercules to go after Thor, and Jane’s spirit is welcomed by Heimdall into Valhalla. 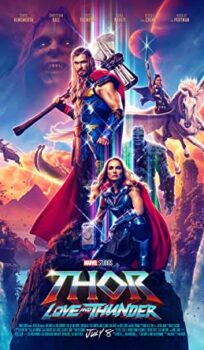