Submitted by Mark I. (Pooper) and Herbmeistr (Longer)

Pooper:
Thor makes it off Sakaar along with Bruce Banner and Valkyrie and returns to Asgard to confront Hela and her forces. He realizes during the battle that the only way to stop her is to destroy Asgard since her power is drawn from there. He does so, and manages to escape with the surviving Asgardians (rescued thanks to the help of Loki and Heimdall) before finally taking his place as ruler.

Longer version:
The movie opens with Thor learning from the fire demon Surtur that Ragnarok, or the destruction everything, will occur once the eternal flame rests on his crown. To prevent this, Thor defeats Surtur and brings his removed crown back to Asgard to prevent it from being reunited with the eternal flame in Asgard’s stronghold.
When he arrives, he discovers that Skurge is now guarding and controlling the Bifrost bridge and that Loki has been masquerading as Odin while the real Odin and Heimdall have been living in exile. With the help of Dr. Strange on earth, Thor and Loki track down Odin in Norway. Odin tells them that he is about to die, and with his death, his firstborn, a daughter named Hela, will return to wreak havoc on Asgard, and that only they can stop her.

Sure enough, no sooner does Odin vanish to Valhalla than Hela the goddess of death appears and demands that Thor and Loki kneel to her. When they refuse and fight back, Hela immediately destroys Mjolnir, leaving Thor seemingly powerless. Loki inadvertently leads her back to Asgard by calling for the Bifrost Bridge. On their way, Hela knocks both Thor and Loki into the depths of space. Upon her arrival to Asgard, she kills several guards while Skurge obediently kneels to her out of survival. She takes Skurge under her wing and continues to lay waste to Asgard, easily dispatching all that stand in her way, until she revives the army of Asgard’s dead warriors and the Fenris wolf, to further her conquest.

Thor and Loki wind up on the planet Sakar, where Thor is captured by Scrapper 142, a former Asgardian Valkyrie. Valkyrie sells Thor to the Grandmaster where he discovers that Loki has been living the sweet life as part of the Grandmaster’s entourage.

Thor is chosen to compete in the Contest of Champions, before which he is given a haircut by Stan Lee. In the arena, Thor discovers that the two-year undefeated champion is none other than Hulk. After the fight, Hulk befriends Thor, who eventually finds the Quinjet Hulk had used to fly to Sakar after the battle of Sokovia. When he plays back the video of Natasha Romanoff, Hulk transforms back into Bruce Banner for the first time in two years. Loki and Valkyrie are tasked by the Grandmaster to return Hulk and Thor to him, but the two fight, ending with Loki forcing Valkyrie to relive the battle against Hela, where all her comrades were killed. Valkyrie agrees to help Thor stop Ragnarok.

With the help of Valkyrie, Banner and Thor are able to get back to Asgard to face Hela. Banner transforms back into the Hulk while Valkyrie, and the remaining Asgard warriors fight the army of the dead. Loki arrives in a stolen ship from Sakar to protect the Asgardians while Thor faces Hela. Skurge sacrifices himself so that the ship can take off. Thor is easily no match for Hela, losing his right eyes in the fight. As Hela is about to deliver the final blow, Thor realizes that his power never came from Mjolnir, and that he is the god of thunder. Thor uses his godly ability to control thunder and lightning to hold Hela off and destroy the rest of the undead army.

Thor then tells Loki that the prophecy was never intended to prevent Ragnarok, but to cause it, as it is the only way to surely defeat Hela once and for all. Loki returns to the palace while Thor distracts Hela. Loki places the crown into the eternal flame, thereby resurrecting Surtur and beginning the annihilation of the planet of Asgard. With all of Asgard’s people safely aboard the ship, Thor, Loki, Valkyrie, Hulk, and Heimdall leave as Surtur destroys Asgard, and Hela with it.

Now wearing an eyepatch like his father before him, Thor, the new king of Asgard, commands that a course be set for Earth.

MID-CREDITS SCENE:
While traveling through space, the ship is blocked by a much larger ship. The ship belongs to Thanos, who knows that Loki took the Space Infinity Stone from the Asgard stronghold (the tesseract).

POST-CREDITS SCENE:
The Grandmaster emerges from his ship to a revolution, and confidently suggests that the people consider it a draw. 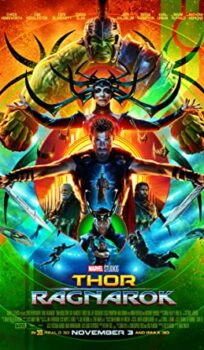