Short Ending:
Thor’s brother Loki betrays Thor and the Gods. Thor returns from his exile on Earth just in time to save his father Odin, his homeworld Asgard, and the homeworld of the Gods’ enemies from Loki’s plots. Loki realizes he will never be as loved or respected as much as Thor, and allows himself to fall into a seemingly bottomless abyss. Thor has gained the respect of Odin and his people, but because of his battle with Loki, is unable to return to Earth where his love, Jane, awaits him.

Long Ending:
Thor (Chris Hemsworth) is stripped of his powers as the Norse God of Thunder and banished by his father Odin (Anthony Hopkins) after he launches an unauthorized assault on the home planet of the Gods’ enemies, the frost giants, thus breaking the centuries-long peace between the two.  Thor arrives as a mortal on Earth, and only the person who proves themselves worthy of the Thunder God’s power can remove the mystic hammer Mjolnir from where it is embedded into the desert rock. Meanwhile, Odin suffers a near-fatal heart attack after telling Thor’s brother Loki (Tom Hiddleston)  that Loki is actually a frost giant whom he adopted after defeating the frost giants centuries ago. Loki ascends to the throne while Odin lays unconscious in a rejuvenation chamber.

On Earth, Thor befriends a group of astrophysicists including Erik (Stellan Skarsgard), Darcy (Kat Dennings), and Jane (Natalie Portman). Thor and Jane eventually end up falling in love. Loki, meanwhile, has arranged to let the frost giants invade Asgard and kill Odin. Defying Loki’s orders, Thor’s god friends the Warriors Three and Sif (Jaimie Alexander) descend to Earth to retrieve Thor. Loki sends the robot Destroyer down to Earth to kill Thor, and if necessary, all who get in the Destroyer’s way. Thor agrees to sacrifice himself to the Destroyer to save the lives of his Earthly and Godly friends. In doing so, he becomes worthy of his powers, Mjolnir returns to him, and he defeats the Destroyer in battle. The group of Gods return to Asgard, with Thor promising to return to Jane and to be a future ally of S.H.I.E.L.D.

Loki allows the frost giants to come within inches of killing his father Odin before he betrays the frost giants and destroys them. Loki believes that by killing the giants, he will be permanently elevated to king and gain the respect of Odin. Thor shows up and reveals Loki’s schemes. Loki then uses the Gods’ interdimensional teleporter to try and destroy the frost giants’ homeworld. Thor defeats Loki in battle, and then destroys the interdimensional teleporter – saving the frost giants’ homeworld while also sealing off his only means of returning to Earth and to Jane. As the floor crumbles beneath the combatants, Odin awakens and saves both from falling into an endless abyss. Loki, deciding that he will never be loved and respected as much as Thor, lets go of Odin and plummets into the abyss. Odin tells Thor that he is proud of him, and Thor discovers that Jane and her co-workers are trying to build a new interdimensional teleportation device on Earth so Thor can return.

After the credits, Nick Fury (Samuel L. Jackson) enlists Erik to help him locate and harness a newly discovered energy source, the Cosmic Cube. Erik agrees to help, but the viewers discover that Erik is being manipulated by Loki who has survived his plunge into the abyss. 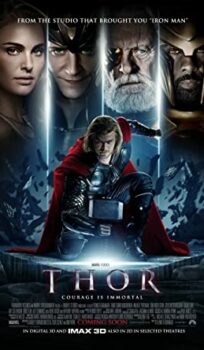