SHORT VERSION:
Despite being hindered by a broken arm that he sustained three days earlier in a skateboarding joust with Chrissy’s overprotective brother Tommy, Corey wins the L.A. Massacre downhill race, beating Tommy to the finish line first in the process. He earns a $1,000 grand prize, which he intends to use to fund the construction of a new skateboarding ramp for his group, the Ramp Locals, after Tommy’s group, the Daggers, destroyed their last one. Also, Sam Flood – the owner of Smash Skates – approaches Corey and awards him a contract with his company.

Afterward, Tommy approaches Corey and compliments him on his performance, then essentially gives him his blessing to continue dating Chrissy, having now come to see him as a worthy and respectable guy. The movie ends with Corey and Chrissy sharing a passionate kiss.

LONG VERSION:
One night, after Corey (Josh Brolin) narrowly escapes a beating from the Daggers – headed by Tommy (Robert Rusler) – for ignoring Tommy’s warning not to date his sister Chrissy (Pamela Gidley), the Daggers torch the skateboarding ramp used by Corey’s group, the Ramp Locals, as an alternative punishment. The next morning, Corey and the rest of the Ramp Locals head over to the Daggers’ house to get some payback and Corey and Tommy nearly come to blows, but Chrissy intervenes and restrains her brother. Tommy subsequently challenges Corey to a skateboarding joust that night at 9:00 at Bunson Canyon Halfpipe, and Corey accepts. As Corey walks away with his crew, Chrissy tries to dissuade him from going through with this joust by first telling him that he will be no better than Tommy and his friends if he does it, then warning him that if he gets hurt doing this, his dream of winning the L.A. Massacre downhill race in three days will be reduced to dust. Unfortunately, Corey refuses to reconsider his decision.

It doesn’t take long for the joust to degenerate into a brawl, and Tommy manages to break Corey’s left forearm before the park rangers show up and force them and everyone else to flee. Chrissy calls out to Corey and tries to go to him, but Tommy’s friend Monk (Mark Munski) keeps her from doing so. She visits Corey the next day and apologizes for what happened last night, but out of being upset over his injury, he tells her that he’d rather be alone for a while. He then tells her that he is considering going back home, and Chrissy replies that she is thinking about going home, too, but back to her home in Indiana, and she adds that she intends to never return to Los Angeles. He then complains about how he likely cannot compete in the L.A. Massacre now because of his busted arm and how he could possibly risk worsening this injury if he does go through with it. She tells him that he never should’ve participated in that joust in the first place. This prompts him to criticize her for not helping him last night, despite the fact that he clearly saw her being pulled away, and after she yells that he didn’t have to fight Tommy and that he alone is to blame for his broken arm, she leaves him and drives back to Tommy’s place.

Upon meeting up with Tommy and the other Daggers, she asks Tommy’s girlfriend Velvet (Sherilyn Fenn) to drive her to the bus station tomorrow morning, then tells her brother that she has decided to go back to Indiana. When he protests this decision, she scolds him for goading Corey into the joust and possibly ruining his dream, then heads upstairs to pack her belongings. While she is doing that, Velvet approaches her and has a chat with her, and Chrissy complains that she is tired of Tommy being so overprotective of her. Velvet tries to convince her to stay and attend the L.A. Massacre, saying that Corey will probably be there, and she asks her if she wants to see him again. She replies that she does, but he doesn’t want to see her, and all she wants now is to go home as soon as possible. Later on, Corey stops by the Daggers’ house wanting to talk to Chrissy, having already come to regret how he spoke to her, and he first encounters Velvet while she is getting an elastic cord out of the trunk of her car for Chrissy so she can use it to tie her suitcase shut. When he asks her if Chrissy is here, she proceeds to lie by telling him that she just took Chrissy to the bus station and she is already on her way back to Indiana. She then tells Corey that Chrissy really liked him a lot, and she came back here crying hysterically and told her that he screamed at her. He then asks Velvet if she has Chrissy’s phone number back in Indiana, but she replies that she doesn’t, then basically tells him to go away.

While hanging out with the Ramp Locals that night, Corey tells them that he has decided to participate in the competition despite his injury, and he wants to use the $1,000 cash prize to fund the construction of a new ramp for them. Meanwhile, Tommy drives Chrissy to the bus station. After she voices her dislike of his overprotective nature, he acknowledges that, while he does sometimes get a little crazy when guys come around and hassle her, he only does it because he cares about her. Chrissy replies that, while she understands how he feels, he needs to realize that she is a grown woman now and doesn’t require a bodyguard anymore.

The next morning, Corey tries his best to prepare for the contest, but his performance is hampered by his broken arm and his feelings over how things ended between him and Chrissy. Chrissy also begins her journey back to Indiana, but while rummaging through her purse that night, she finds the skateboard pendant necklace that Corey had given her. After spending some time staring at it, she decides to return to Los Angeles and to Corey, so she gets off the bus and spends the rest of the night and into the following day hitchhiking back.

Corey makes it to the competition just as it is about to start. As the race progresses, the number of competing skaters gradually dwindles until only Corey and Tommy are left. Also, Chrissy makes her arrival at the finish line during the latter half of the race, joining the crowd of spectators already assembled there. As Corey and Tommy get closer to the end, they briefly struggle with each other as they go around a bend in the road, and Tommy ends up losing control and crashes. Corey, however, continues on and nails the final jump, then crosses the finish line to become the new champion. As Corey celebrates with the crowd, Sam Flood (Chuck McCann) – the owner of Smash Skates, whom Corey had become acquainted with days before – comes up to him and tells him that he is awarding him a contract with his company.

Corey then notices that Chrissy is in the crowd, but after he goes up to her, Tommy gets his attention. He compliments Corey on his performance and tells Chrissy that he is happy to see her back, and he essentially gives Corey his blessing to continue dating Chrissy, having now come to see him as a worthy and respectable guy. He then walks off with Velvet while Corey and Chrissy share a passionate kiss. 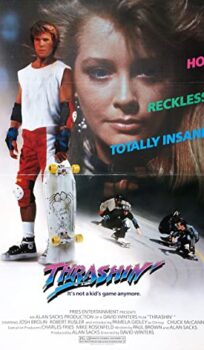