Turner (Robert Redford) works for the CIA, reading mystery novels and entering pertinent data into a computer to create a master list – checking for leaks and/or good ideas. He goes out to lunch and comes back to find the whole office murdered. When he tries to meet up with the CIA operatives sent to bring him in, it is a set up.

He kidnaps a girl off the street (Faye Dunaway) in a attempt to find a quiet place to think things through. She ends up helping him and he finds a contact, Higgins, in the CIA to help him figure out why he is being targeted. Turns out he unwittingly uncovered a plot by a rogue CIA operative who was attempting to set into motion a theoretical plan of invasion in the middle east. The man is killed by a CIA employed assassin who was at one point sent after Turner. They chat and the assassin tells Turner that if he stays in the US, he won’t live long. Turner says he misses America if he is gone too long…

Higgins comes to bring Turner in now that the plot has been uncovered, but Turner, disgusted with the lack of concern for the casualties along the way, tells Higgins he has given his story to the New York Times. As Turner walks away Higgins calls after him, “You can take a walk, but how far if they don’t print it?” 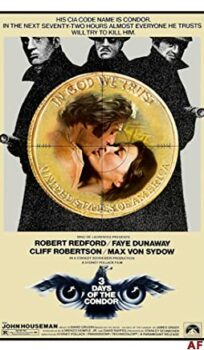