This movie is very different from the 1948 remake with John Wayne.  The 1936 version is B&W, the remake is in color.  The remake is campy, and almost a comedy.  The original is much darker and more serious in tone.  The ending is also very different.

An outlaw named Bob (Chester Morris) returns with his gang to his hometown.  His old girl is about to marry the banker.  He goes to see her, and she rejects him.  The gang rob the bank.  Pedro is shot and killed.  Bob, Doc and Gus (Walter Brennan) escape into the desert, with a posse after them.

At a water hole, they find a dead man, a dying lady and their one-year-old son.  The lady dies soon, leaving the baby at the mercy of the outlaws.  Their horses die from drinking poison water, and they have to travel on foot. Bob wants to abandon the baby, but Doc insists on carrying the baby along.  Doc gives his share of the bank money to Bob, in return for keeping all the canned milk for the baby.

Doc dies, and Gus takes over caring for the baby.  Bob keeps threatening to abandon Gus, or to shoot the baby, so they can reach a town.  The next morning, Bob finds Gus has died during the night.  There is a note, written by Doc, saying that if Gus dies it is up to Bob to carry the baby to safety, as the baby deserves to live more than any of them do.  Bob carries the baby with him.  Bob keeps saying he will desert the baby, but never does.

Bob is six miles from the town of New Jerusalem, but so dehydrated he can not continue.  He comes to a watering hole with poison alkaline water.  He realizes that if he drinks it he will die in a few hours, but will get the strength to reach the town.  Bob drinks the alkaline water.  He carries the baby to New Jerusalem.  He takes the baby into the church, and drops dead. 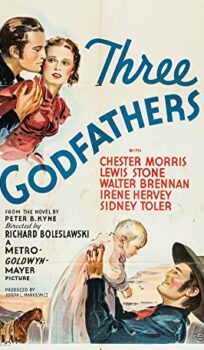