Three different samurai, Sakon Shiba (Tetsuro Tamba), Einosuke Kikyo (Mikijir Hira) and Kyojuro Sakura (Isamu Nagato) get involved with a group of peasants who had kidnapped the daughter of The Magistrate (Hisashi Igawa) in order to air their grievances in the villages.

Shiba negotiates the release of Aya, The Magistrate’s daughter, and offers to be punished in the place of the peasants, under the rule of a “Samurai agreement.” The Magistrate accepts, but quickly breaks his word, setting assassins after the three peasants who are subsequently murdered.

Enraged, the three samurai band together and fight off the men The Magistrate have sent. Shiba sees the procession of the local lord and tries to get the petition the peasants had written and died for to him. However, none of the friends of the murdered peasants will rise to take it to the Lord, bowed by fear and cowardice. Realizing many people have died for nothing, Shiba throws the petition to the ground in disgust and leaves the villagers in their shame.

Shiba  goes to kill the Magistrate for all the people he had murdered only to be stopped by Aya. Instead, Shiba cuts off the top knot of The Magristrate (a sign of disgrace) and tells he will have to answer to his Lord and the peasants. Shiba reunites with Kikyo and Sakura, and the three walk down the road to an unknown future. 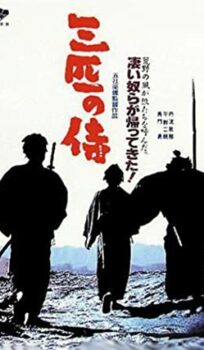