Larry, Moe & Curly (Sean Hayes, Chris Diamantopoulos and Will Sasso) are dropped at a nun-run orphanage in their infancy and hijinks ensue from then on. The orphanage is being forced to close due to financial ruin from the accidents caused by the trio over the years, so the stooges (in their early 30’s or so) leave the orphanage to raise the necessary $830,000.

As the stooges march with signs reading “will wirk for $830,000” an adulterous tart named Lydia and her “husband” Mac hire the stooges to sneak in to her bedroom at night and smother her (real) husband, claiming that he suffers from a fatal disease and doesn’t want to see the end coming. The stooges promptly cause Mac to get hit by a bus. They can’t understand why Lydia is upset and doesn’t pay them. Mac survives.

The stooges run into their childhood friend, Teddy, on the street. When the boys were young, Teddy was adopted by a wealthy couple; Moe was initially chosen, but he wouldn’t leave Larry & Curly. Now grown up and successful, Teddy invites them to stay at his home. Moe, still bitter over the wealthy couple’s change of heart, refuses.

The stooges argue over Moe’s poor leadership and split up; the argument is seen by tv scouts who believe it is an audition, and Moe lands on the cast of Jersey Shore.

Larry & Curly go to Teddy’s family’s law firm to ask him for a loan. Teddy isn’t at his office but his father tells them that Moe could have stayed with the couple but wouldn’t leave his friends at the orphanage. They see a photo of Teddy’s wife Lydia and his best friend, Mac. They figure out that Lydia is trying to kill Teddy and leave to warn him.

They find Moe and reconcile, and reach Teddy in time to prevent his murder. The big confrontation ends with Teddy’s widowed father and Lydia behind it all, as Teddy’s rich mother had left her fortune to her son. Dad and Lydia were using Mac to kill Teddy.

In slapstick stooge fashion, the bad guys are caught. Teddy gets engaged to his company secretary and they adopt from the orphanage, which has been saved by Moe’s Jersey Shore money and a new reality show, Nuns vs. Nitwits. 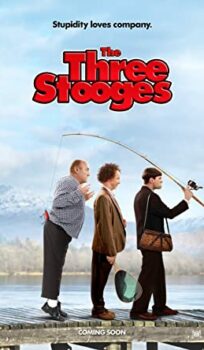