Alithea Binnie (Tilda Swinton)is a lonely scholar studying mythology. She comes across a glass bottle that contains a Djinn (Idris Elba), who offers to grant Alithea three wishes so that he may finally be free since he has been imprisoned for three thousand years. Alithea believes he is a trickster, but the Djinn tells Alithea four separate stories about how he came to be where is now, and how the stories all involve themes of love and desire.

The Djinn was in love with the Queen of Sheba until King Solomon won her over and imprisoned him in a brass bottle. After over two thousand years, the Djinn meets a slave girl named Gulten in love with Prince Mustafa, but his father, the Sultan, has them killed after his head concubine convinces him they are making a play for his throne. The Djinn is kept sealed away until he lives around the time two brothers inhabit the space he dwells in. One of the brothers’ concubines comes across his bottle but wishes him to go back to where he came from. The Djinn is later found by a man who gives the bottle to his wife Zefir, and she wishes for knowledge. While the Djinn falls in love with Zefir, she becomes overwhelmed by him and she wishes they never met so she will forget him.

Alithea and the Djinn fall in love, but his prolonged exposure to the modern world does damage to his body, so Alithea wishes for his freedom. After three years, the Djinn is healed and is able to continue visiting Alithea. 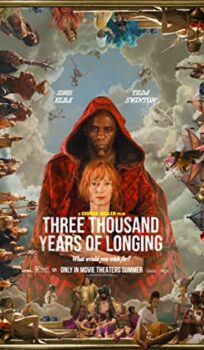