Ray (Val Kilmer) and Walter (Graham Greene) go to Red Deer Table one night on Grandpa Sam’s (Chief Ted Thin Elk) urging, where they find evidence of uranium test drilling. Based on all the evidence they received up to this point, this is what actually happened/is happening:

The one who killed Leo (Allan R.J. Joseph) was Richard Yellow Hawk (Julius Drum), who was working for the FBI as a mole in the ARM. Ray’s boss Frank (Sam Shepard) came to him in prison and gave him this task in exchange for being paroled, and he threatened to revoke it if he didn’t do what he was told. The government was test drilling for uranium at Red Deer Table for a while without the consent of the natives – save for the pro-government tribal president Milton (Fred Ward) and his men. Milton was close to agreeing to a secret deal with Frank and the feds to give them the land so the government could mine for the uranium freely, and Milton and the feds would not hesitate to kill anybody who found out about the deal. Leo found out about it and went to tell Maggie (Sheila Tousey), since she had media contacts and could get the story out to the newspapers, but Frank found out from Richard that Leo knew and was going to tell Maggie, so he had Richard kill Leo when he arrived on Maggie’s property. Richard then took Leo’s body and put it off of the reservation so the feds would have legal cause to go on the reservation to investigate the murder, and the murder was pinned on ARM leader Jimmy Looks Twice (John Trudell) on the grounds of Jimmy and Leo having had two bad altercations before, but it was truly pinned on him in order to stop the ARM movement, since they were the only ones who could do anything about the secret deal. And worse, the uranium from the test drillings was what contaminated the reservation’s water, so if the feds commenced with full-on strip mining, the reservation would turn into a dead zone.

After figuring this out, they find Maggie’s dead body near where they stood, and when they return to Richard’s house the next day to get him off the reservation, since he knew about the deal as well, they find him dead, too. When they step outside the house, they find that Milton, his goons & the feds were starting to close in around them, intending to apprehend them for knowing about the deal. They respond by leading them on a chase across the reservation. The chase ends at the Stronghold, where Ray lets Frank and everyone else know about how he and a lot of the reservation’s people know of their crimes and what contaminated the water, and that they couldn’t kill everyone who knew. Before he and Walter can be harmed, Grandpa Sam arrives with an army of ARM members, who outnumber and outgun Frank & company. “This land is not for sale,” Ray yells to Frank.

Walter and a now-unemployed Ray pay tribute at Maggie’s grave, and Ray tells Walter that Frank will now be subjected to an “internal security investigation” and that he will get a hold of Maggie’s media contacts to get the story out. Walter tells him he is welcome back on the reservation anytime, and before leaving, Ray gives Grandpa Sam his Rolex, and Grandpa Sam gives him his smoking pipe in return. Ray exits the reservation and is last shown looking out at the open highway. 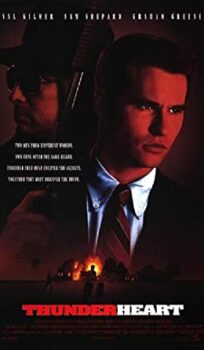