Sir (Barry Lynch) and Jerry (Michael Medeiros) accidentally start up a forest fire while shooting a tick-infested Panic (Alfonso Ribeiro) for trespassing on their land. The fire causes the ticks to run towards the cabin where Charles (Peter Scolari), Holly (Rosalind Allen), and the other teens are. Sir and Jerry head there to avoid the ticks and are given refuge, but then Panic returns, and he identifies the two as his attackers before dying.

The duo then holds everyone hostage, and order them to turn over their van so they can escape. As Jerry goes to start up the van, a tick bites him, and its neurotoxin causes him to hallucinate seeing Sir as the sheriff they had killed earlier. He drives the van into Sir, crashing through the cabin wall and killing himself. The ticks come storming in, and they all soon go into Panic’s body. While Charles, Holly, and the teens flee to an upstairs bedroom, the combination of the many ticks, plus some steroids Panic stole from Rome (Ray Oriel) earlier on and ate, somehow causes a giant tick to bust out of Panic’s body.

The giant tick kills Sir and then goes up after the others. Tyler (Seth Green) gets outside, starts up the van, and brings it beneath the bedroom window. As the teens are getting out onto the van, the giant tick bursts in. It gets a hold of Rome, but Tyler comes up with a flaming broom and sets it on fire. He and Rome get out, and as they all drive away, the giant tick explodes. The fire from the explosion ignites a propane tank, causing it to blow up and destroy the cabin. We are left to assume the other ticks die in the forest fire.

The group puts the van in a scrapyard upon their return to the city. However, one day, a mutated tick egg falls off the bottom of it onto the ground…. 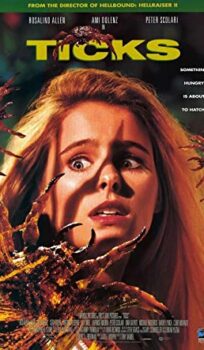