Pooper::
The Bronskis and Sobinski manage to escape Nazi-occupied Poland along with the entire theater troupe, the Jews they were hiding, and Anna’s gay costume designer. They crash land in England where Frederick Bronski is honored by being allowed to perform his “Highlights from Hamlet” in Shakespeare’s homeland.

Long Ending:
In this remake, actor Frederick Bronski (Mel Brooks) is the arrogant owner and lead actor of a popular Polish theater company during the 1930s. His wife and lead actress is named Anna (Mel Brooks’ real-life wife Anne Bancroft) and she is disgusted with her husband’s boorish behavior. At the urging of her gay costume designer Sasha, Anna begins an affair with Andre Sobinski (Tim Matheson), who works as a pilot in the Polish army. Every time Frederick performs his indulgent “Highlights from Hamlet” act, Sobinski noisily leaves the performance hall to meet Anna backstage.

The Nazis soon invade Poland and Sobinski is sent to England to assist in the war effort. Frederick is forced to stop performing his parodies of Hitler and the Nazis. He also decides to secretly hide a dozen Jews in his theater’s basement. The Nazis commandeer the Bronski’s home and they are now struggling to get by.

Meanwhile, the Polish defectors help famed anti-Nazi propogandist Professor Siletski (José Ferrer) create a list of the leaders of the underground Polish resistance. Sobinski asks Siletski to also give a message to Anna so that she can know he is alive and well. Soon after Siletski leaves, however, the English learn that he is actually a double agent who intends to give the list to the Nazis. Sobinski volunteers to return to Poland to try and stop Siletski from making the delivery.

Upon arrival, Sobinski immediately finds Anna and informs her of his mission. He also meets Frederick (who is ultimately more upset that Sobinski has walked out on his performance than his affair with Anna). Anna  is called in by Siletski for questioning, but she convinces him that the message he got from Sobinski for her is harmless. Anna begins flirting with him to buy time for Sobinski and Frederick to come up with a plan. Since Siletski has never actual met his Nazi contact, Frederick dresses up as a Nazi commander, the stage is transformmed into a Nazi office, and Siletski is picked up by some cast members and brought to Frederick (who orders that Anna not be allowed to leave his room). Siletski gives Frederick the list, noting a copy remains in his hotel room. Siletski then deduces that the entire meeting is a ruse and during a subsequent struggle, is killed by Sobinski.

Since Anna remains stuck in Siletski’s hotel room (and needing to destroy the copy of the list), Frederick dresses up as Siletski and returns to the hotel – setting Anna free and burning the remaining copy. Just after he does so, Nazi Captain Schultz (Christopher Lloyd) arrives to take “Siletski” to meet Col. Erhardt (Charles Durning) to give him the list. Frederick gives the acting performance of a lifetime and convinces Erhardt and Schultz that they have already killed the leaders of the resistance. Meanwhile, Sasha is captured by the Nazis and set for deportation.

Further misadventures ensue, culminating in the Bronskis being hired by Col. Erhardt to put on a show for Hitler himself. Sobinski, the Bronskis and the theater troupe concoct a plan to escape Europe along with their Jewish refugees and Sasha. First, Sasha is given a one-night release to help Anna prepare for the show. The Jews are dressed as clowns and walk down the aisle and out of the theater, right under Hitler’s nose. Frederick dresses as the fuhrer himself to get the real Hitler’s personal convoy to transport everyone to the airfield. Although the fraud is exposed after everyone is on the plane, Sobinski manages to get the plane off the ground before they can be stopped (and inadvertently takes out the Nazi’s phone lines while in progress). After several hours, Sobinski makes an emergency landing. Frederick (still dressed as Hitler) walks in to a British Pub to ask if they are in England, dropping the jaws of everyone there.

The film jumps ahead and we see Anna, Frederick and Sobinski being praised by British officials for their bravery. They ask if there is anything they can do to reward them, and Anna asks if Frederick can perform his “Highlights from Hamlet” in Shakespeare’s homeland (it is clear that Frederick and Anna are happily reconciled). The British agree and this time, Sobinski staysfor Frederick’s entire performance (although a wholly unrelated English man noisily exits the theater during the performance). 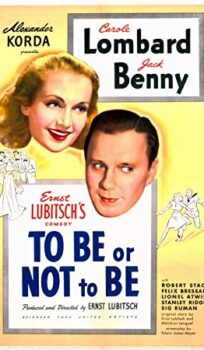