Richard Chance (William Petersen) is a Secret Service agent who is investigating counterfeiter Rick Masters (Willem Dafoe). After Chance’s partner is killed by Masters’ bodyguard, Chance becomes outraged and vows revenge. Chance and his new partner John Vukovich (John Pankow) spend weeks trying to track down Masters, but finally find him by posing as clients interested in Masters’ services. Masters tells them that he needs $30,000 in real money before he’ll agree to the deal. However, the Secret Service won’t give them the money to set up the bust. Chance, willing to do whatever it takes to get Masters, convinces Vukovich to kidnap and steal the money from a man who, in reality, is an undercover FBI agent. They steal $50,000 from him but are immediately chased by the FBI. During the chase, the FBI accidentially kill their own agent, and Chance and Vukovich get away.

Chance later meets Masters and pays him the money that he requested, even though Masters knows they stole the money from the FBI. A few days later, the bust goes down. Chance and Vukovich try to arrest Masters and the bodyguard, but the bodyguard pulls a gun and shoots Chance just as Chance shoots the bodyguard, and both men are killed. Masters gets away, but Vukovich chases him to the warehouse he uses to print his counterfeit money. By the time Vukovich arrives, Masters is burning all of his equipment. Vukovich shoots Masters, who falls into the fire and burns to death. 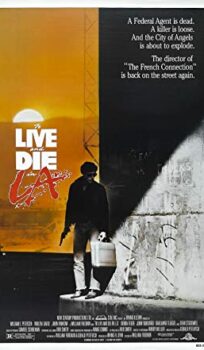