After being downsized, Ryuhei pretends to go to work every day and eventually takes a job as a janitor.

Ryuhei’s wife Megumi is miserable with her life, as is their oldest son who runs off to join the US Military in the Middle East.

Their youngest son, Kenji has been secretly spending his lunch money on piano lessons, which his father forbids.

Megumi is kidnapped but when allowed to use the bathroom sees her husband as a janitor.
She leaves willingly with the kidnapper.

Despondent, she appears to commit suicide by drowning in the ocean.
Ryuhei, while running away from life gets hit by a truck and appears to be dead.
Kenji is caught trying to run away by sneaking onto a bus.

Everyone is horribly unhappy and wants to end their current situation.

Megumi makes a meal for all of them.

Kenji auditions at a prestigious music academy and is awesome.
It seems as though, with the help of music, this family will survive afterall. 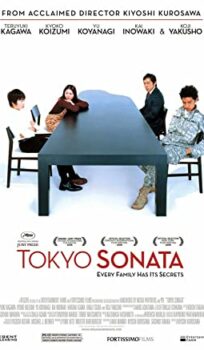