Pooper:
Tomi passes away suddenly and while the entire family reunites for her funeral, they all quickly return home. Shukichi’s daughter-in-law stays the longest, and is the only one to share a tearful good-bye with him . Shukichi is left alone with nobody to keep him company in his old age.

Long Ending:
In Post World War II Japan, elderly couple Shukichi (Chishû Ryû) and his wife Tomi (Chieko Higashiyama) decide to visit their children who live in Tokyo. Their youngest daughter, Kyôko, still lives with them, but they haven’t seen their other children for eight years.

In Tokyo, they initially spend time with their eldest son Koichi (Sô Yamamura) and their grandkids. Tomi laments that she will likely not see her grandchildren grow up. Also in Tokyo is their eldest daughter Shige (Haruko Sugimura), who owns and operates a successful hair salon. Tomi and Shige seem to care for their parents, but constantly complain that the trip is costing them money, speculate on when their parents will leave, and fail to set aside much time to spend with them. The most attentive to the parents is their daughter in law, Noriko (Setsuko Hara). Noriko was married to their son, Shoji. He  went missing and was presumably killed in World War II. Though it has been many years since his disappearance, Noriko has not remarried and still keeps pictures of Shoji in her small apartment.

Ultimately, Koichi and Shige pay to send their parents to a seaside resort (partly so that they will not need to chaperon them around the city). The hotel is full of young people and Shukichi and Tomi decide to leave early as they don’t fit in. Koichi and Shige are unable (or unwilling) to accommodate their parents’ early return. Tomi goes to Noriko’s apartment to stay with her for the night. Noriko welcomes her mother-in-law and Tomi gives Noriko her blessing to get remarried.

Meanwhile, Shukichi visits some friends that have moved to Tokyo to reminisce (and hopes to stay with them for the night). The old men get drunk and each of them remarks on their disappointments with their children, noting that the children have no time for their parents and lack ambition. Shukichi and his friend drunkenly stumble back to Shige’s place, where she takes them in after chastising them for being drunk.

The next day, Tomi (who is given spending money by Noriko despite the fact Noriko is by far the poorest of their children) and Shukichi meet at the railroad station along with their families. Their plan is to visit their youngest son, Keizo, who lives in Osaka. Tomi gets sick on the train ride and they ultimately end up going straight home. Soon after, Tomi soon falls into a coma and Shige and Koichi (without their respective spouses or kids) rush to their hometown to see her. Keizo is also informed of his mother’s illness, but fails to buy a ticket for a train that will get him to his hometown before Tomi passes away.

Noriko journeys to Tomi’s home for the funeral. Keizo who has since arrived seems especially sad, regretting he had not made the time to see his mother and for not being a better son. The children all share a meal where Shoiki, Shige and Keizo announce they will be leaving the next day. While Shukichi is out of the room, Shige also lays claim to several of Tomi’s possessions.

Everyone leaves but Noriko and Kyôko. Eventually, Kyôko leaves to go to school. She complains to Noriko that her siblings have become selfish and greedy, but Noriko simply responds that as children age, they gain their own families and independence. Kyôko is saddened that such a fate awaits her and leaves in tears. Noriko is the last to leave, and the only one to sit down with Shukichi before she goes. Shukichi thanks her with a bow for all she has done, gives her permission to remarry, and praises her selflessness. Noriko cries that she is selfish herself, sometimes going many days without thinking of her dead husband. Shukichi responds that of all his children, she has shown him the most kindness (noting she has done so even though she is not related by blood). He gives her one of Tomi’s most-treasured possessions to show his gratitude for all she has done. Noriko cries on the train ride back to Tokyo.

Shukichi sits in his house by himself. A neighbor stops by and mentions that he will be very lonely without his wife and children. Shukichi acknowledges that this is true, stating he would have treated his wife better (it is revealed earlier that he had a drinking problem in his youth) had he known she would be gone so soon. The movie ends with Shukichi all alone simply watching the ships sail through the bay. 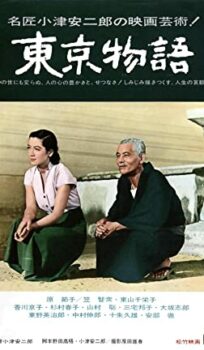