Short pooper:
Secretary Clay (Guy Pearce) is the mole. Kelly (Michael B. Jordan) confronts him, snatches him, takes off with him in his car and forces a confession out of him, before driving them both off a bridge into the Potomac. It seems they both drown; however, Kelly’s dear friend and superior, Lt. Commander Greer (Jodie Turner-Smith) rescues him and sends him off with a new identity -“John Clark”- provided by Ritter (Jamie Bell). A mid-credits scene shows Clark and a now-CIA Director Ritter discussing the creation of a new anti-terrorism force, codenamed RAINBOW.

Longer version:
After Viktor Rykov (Brett Gelman), the surviving assassin who murdered Kelly’s wife, Pam (Lauren London), and turns out to be a double agent, commits suicide with an explosive vest, the team realizes the revenge mission was a setup that intended to have them there, as an excuse to start an international conflict that would escalate into a new war between Russia and the United States.

Things quickly spiral out of control when local Police answers, but also get shot and killed by the same snipers who were, at the same time, trying to take the American team out. Kelly makes the decision of staying behind and fighting the Russians -cops, snipers and Emergency Responders-, creating enough of a distraction for everyone else to escape. After an intense, protracted battle, Kelly manages to don a police uniform and sneak away in an ambulance. He reconvenes with the rest of the group and they all flee Russia, via a boat.

Back in Washington, Kelly figures out the only other person who could have been responsible for the sabotage -particularly because of his level of inside knowledge and his insistence on having Kelly be part of the mission- was Secretary Clay himself. He confronts him directly at a restaurant and snatches him at gunpoint, both taking off in Clay’s car. When Kelly threatens he will come after Clay’s family, Clay finally admits being a mole, having caused all the leakages of intelligence information; his motivation was to cause the relations between Russia and the United States to derail, thus triggering a new war that “would boost the economy and galvanize the nation against a common enemy”.

This said, Kelly drives the vehicle off a bridge, into the Potomac River, with them both inside. As it quickly floods, Kelly forces Clay to say the name of his murdered wife, Pam, which he does. Clay drowns and Kelly seemingly does, too, before looking at a rainbow reflection (important later!) and while reminiscing of Pam.

However, Kelly is rescued, at the last minute, by Greer, who was standing by with Scuba gear. Kelly had secretly recorded the entire confession, which is turned over to the Government and the press effectively condemns Clay as a traitor and conspirator, thus mending the problem between the two countries. Afterwards, Greer and Kelly say their goodbyes and part ways at Washington Union Station; Ritter has provided Kelly with a new identity, as “John Clark”.

In a mid-credits scene, “Clark” and Ritter -who has been promoted to Director of the CIA- reconvene once more in Washington. They discuss the creation of a multinational, anti-terrorism task force, which would be known with the codename RAINBOW -from diverse locations and with varying skills and levels of knowledge-, thus setting the stage for the events of the next saga chapter, “Rainbow Six”. 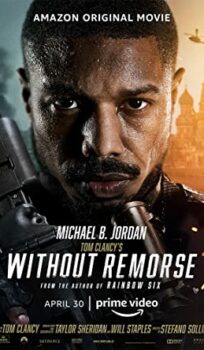