Lara Croft (Alicia Vikander) discovers her long lost father Richard (Dominic West) had been doing research into a legendary sorceress named Himiko, whose body is buried on the island of Yamatai. With the help of a captain named Lu Ren (Daniel Wu), Lara travels to the island and is captured by a team of mercenaries working for Trinity and a man named Mathias Vogel (Walton Goggins), who want to find Himiko’s body for their own nefarious purposes.

Lara escapes the villains and finds Richard having been hiding there the last few years. When Lara tries to fight back against Vogel and his men, he forces her to open up Himiko’s tomb so that he won’t kill Richard. They find Himiko’s body, but realize that one touch from her leaves the victim infected by a fast-spreading disease. Richard gets infected and decides to blow up the tomb to stop the infection from spreading. Lara fights Vogel, who took one of Himiko’s fingers, and she shoves it down his throat so that the infection (and a high fall) can kill him. Lara escapes the tomb and goes home.

Lara later finds out that Trinity’s parent company was owned by the Crofts, and that her former guardian Ana Miller (Kristin Scott Thomas) had been plotting with Vogel and Trinity the whole time. Lara decides her work is not done and that there are more villains to face. 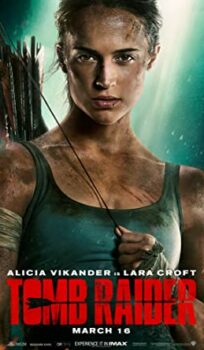