Tommy’s success as the new Pinball Wizard isn’t enough to placate his mother Nora, and she continues to seek a cure for his deaf, dumb (mute), and blind condition, but fails.  Fed up with his inability to respond to anyone or anything — he instead, as ever, spends most of his time staring into a full-length mirror in their new seaside mansion — she flings him through it, and he lands in the sea.  When he surfaces, he is finally cured.

News of the “miracle cure” serves to make Tommy an even bigger star, and he now attracts out-and-out worshippers to his public appearances; his family (in particular his stepfather Frank) capitalizes on his desire to lead them to enlightenment by building “Tommy’s Holiday Camp”, where his followers buy licensed merchandise and are subjected to sensory deprevation similar to what he had experienced before his cure; they then play pinball.  But their desire to be like him doesn’t give them the patience to endure this, and they riot; Nora and Frank are both killed, the camp is set ablaze, and Tommy barely escapes with his life, heartbroken by what has happened.

At the same time though, he is finally free of both his horrible past and the demands of others, and as the movie’s opening shot had his father silhouetted against the setting sun, the closing shot has Tommy facing the rising one. 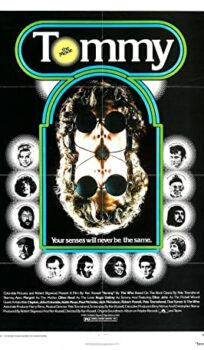