Tony Rome (Frank Sinatra) is a private detective in Miami.  A young lady is found unconscious in a hotel.  Hotel workers recognize her as the daughter of Rudy Kosterman, a politically connected developer and the wealthiest man in Miami.  To avoid scandal and political problems, the hotel workers hire Tony to take her back to her father’s house, without revealing where she was.  Kosterman is concerned because his daughter Diana is disappearing for long periods of time and spending a lot of money.  Kosterman hires Tony to watch Diana.

When Tony gets home, two thugs are there demanding “the pin”.  They knock Tony unconscious and ransack the place searching for the pin.  Later, Diana and Mrs Kosterman both separately and secretly hire Tony to look for this pin.  It is an extremely valuable pin encrusted with diamonds that disappeared while Diana was unconscious.  As Tony searches, the people who might have it, or know where it is, keep turning up dead.  Tony’s friend at the hotel is killed, but blood at the scene indicates that he also seriously injured his attacker.  Kosterman is shot at from a moving vehicle, but lives.  A mysterious man named Nimmo seems to be at the center of things, but everyone is too terrified to talk about him.  Tony learns that Kosterman was married before to Lorna.  Lorna, Diana’s mother, is now living on skid row with a disgraced quack doctor named Boyd.  Diana is going to visit her mother, and taking them money to feed their alcoholism and addictions.

Mrs Kosterman was also married before, to Nimmo.  She never got a divorce from Nimmo, so she is committing bigamy.  Nimmo has been blackmailing her, and she has been selling the jewels from the pin (replacing them with glass) to pay him off.  Nimmo was at the hotel searching for the pin.  Nimmo killed Tony’s hotel friend and was injured.  The police are looking for someone with these injuries, so Nimmo could not go to a hospital.  Nimmo went to Boyd, the quack doctor who is now married to Lorna.  Boyd found papers on Nimmo revealing the blackmail. Boyd made sure Nimmo “died of his injuries” and kept the papers.  Boyd figures now he can blackmail Mrs Kosterman.  Boyd has been killing to find the pin.  If Kosterman gets the pin and finds out the jewels are fake, the scam is over.

Boyd then decided to try and kill Kosterman, figuring that if Diana inherits all the money, Boyd will be able to get it from her.

Tony captures Boyd and turns him over to the police.  He does not reveal anything to Kosterman, so they stay happily married.  Oh, and the mysterious redhead (Jill St John) dumps Tony and goes back to her husband. 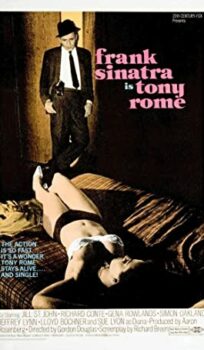