Michael Dorsey (Dustin Hoffman) gets a real identity crisis, and becomes fed up with pretending to be Dorothy Michaels:

Michael tries to get out of his contract, but his agent (Sydney Pollack) tells him that it’s iron-clad. Finally, an opportunity arises one day, when the film editor spills a celery tonic on the day’s broadcast tape, and the cast has to perform a scene live. Nobody is terribly surprised when Dorothy, as usual, departs from the script. But everyone’s curiosity turns to stunned shock when Michael (pretending to be Dorothy, portraying “Emily Kimberly”) removes his wig and make-up, and says that “Emily Kimberly” is actually “Edward Kimberly,” Emily’s black-sheep brother using her identity to fulfill her destiny. Edward (mirroring Michael’s own personal growth) says that pretending to be Emily has allowed him to he “strong enough to be the woman that was the best part of myself.” Julie, however, is not impressed, and punches Michael in the stomach as the show goes to commercial. Michael is fired. Weeks later, his play is going moderately well, he returns Les’ engagement ring and attempts to reconcile with Julie. She is very angry at first, but forgives him when he describes the depth of their friendship (and agrees to lend her some of Dorothy’s outfits). The viewer should probably infer that they get together. 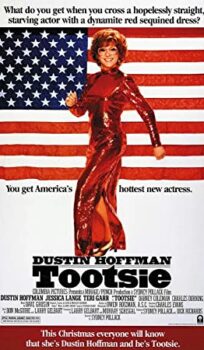