When Patrick (LL Cool J) learns from his fiance Debbie (Debi Mazur) that she slept with his dad General Leland (Michael Gambon), as well as how she learned from the General that his mother really died doing a reconaissance mission for him and not appendicitis, he switches sides and joins Leslie (Robin Williams) and his friends. After telling them about the General’s plans, they agree that he’s gone too far, so they infiltrate the toy factory to remove him from power.

The General sends his war toys after them, but Leslie eventually makes it to his office and fights him. As they fight, a toy helicopter shoots a missile at Leslie, but it misses him and hits the main computer, destroying it and deactivating all of the war toys – except for the General’s Sea Swine weapon, which switches to alternate power.

As Leslie and Patrick confront the General, the Sea Swine appears. It locks onto Leslie, but then an arriving Alsatia gets in the way, so she gets hit, causing her head to fly off and reveal her true android self. Leslie’s dad Kenneth (Donald O’Connor) created her after his wife died so Leslie could have a companion. The General tries to escape, but the Sea Swine malfunctions and locks onto him and fires. The screen goes white….

Leslie becomes the rightful owner of Zevo Toys and restores the factory back to normal. The General is now being taken care of in a hospital bed like Old General Zevo (Jack Warden). Alsatia is repaired, but has a few glitches. After Leslie, Patrick, Alsatia, and Gwen (Robin Wright) pay a visit to Kenneth’s grave, Patrick bids Leslie and company farewell, since he has to go back to the army, and heads off into the grassy fields. 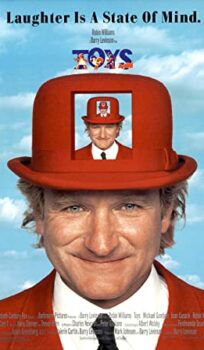