The Tijuana story:
Javier’s partner Manolo (Jacob Vargas) is killed by Obregon’s men when he tries to sell information to the DEA that General Salazar’s working with the still-alive Madrigal to bring down the Obregon cartel. Javier (Benicio el Toro) is taken in as one of Obregon’s men, but ends up telling the DEA the same things that Manolo was killed for.

The San Diego Story:
Helena (Catherine Zeta-Jones) engineers the survival of her husband’s business, and arranges for the assasination of Eduardo Ruiz (Miguel Ferrer) before he can testify against her husband. During the first assasination attempt, Castro (Luis Guizman) is killed in a car bomb meant to kill Ruiz. Ruiz is later killed in his hotel room, and the charges against Carlos Ayala (Steven Bauer) are dropped because Ruiz can’t testify against him. Ayala, after being freed, arranges Arnie Metzger’s (Dennis Quaid’s) death for horning in on his business, house and wife. Gordon (Don Cheadle) breaks into the house and pretends to pick a fight so he can plant a bug under Ayala’s desk.

The Cincinnati Story:
After finding his daughter prostituting herself to finance her drug habit, Wakefield (Michael Douglas) breaks down during a press conference and walks away from the drug czar job. 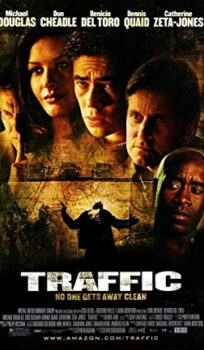