POOPER:
Cade is the the last knight, but only Vivian can reverse the power of Merlin’s staff. With the help of the Autobots and the TRF, the humans take back the staff, defeat Quintessa, and stop Cybertron from absorbing earth.

The next mission: find Unicron’s essence within the Earth’s core.

LONG VERSION:
Optimus Prime makes it back to Cybertron, where he meets Quintessa, the creator of the race of Transformers. She was betrayed by her twelve knights who took her staff of power and brought it to earth. Merlin used the power of the staff to call forth the three headed dragon, which is a combined form of the twelve Cybertronian knights. With their help, Arthur and the knights of the round table were able to win their wars and establish England.
After Quintessa tells Optimus that earth houses Cybertron’s enemy Unicron, she brainwashes him to become Nemesis Prime, her servant. She intends to use the staff of Merlin to absorb Unicron into Cybertron, thus restoring it to its former planetary glory. She guides Cybertron to earth to enact her endgame.

Meanwhile, Cade Yeager meets with Sir Edmond Burton and Professor Vivian Wembley to discover the secret location of Merlin’s staff. Cade is discovered to be the last knight, and Vivian us revealed to be the last living descendant of Merlin. Together, they find the staff, but are ambushed by Nemesis Prime and the Decepticons, led by a fully reformed Megatron. Though Nemesis Prime steals the staff, he reverts to his original self after hearing Bumblebee’s real voice. Megatron takes the staff from Prime and delivers it to Quintessa just as Cybertron begins to impact Earth.
Working together with troops led by Colonel Lennox, the Autobots along with Cade and Vivian are able to stop Quintessa and prevent earth from being absorbed into Cybertron. With the Decepticons once again on the run, Optimus closes the movie with a promise to find Unicron within the earth.

Elsewhere, Quintessa is found to have survived. Disguised as a human, she suggests to a group of explorers that she can show them how to awaken Unicron. 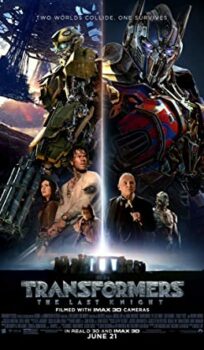