POOPER:
Grinko and Kolzak are on the payroll of the Russian drug lord that Carlos and Abby stole from. Roy and Jessie had given back to Grinko the drugs that were hidden in the matryashka dolls, but Abby was being tortured about the money that was also stolen. Roy and Jessie escape Grinko and Kolzak when their train ultimately crashes into an Army transport train. Grinko kills Kolzak, claiming he just rescued the pair after his partner kidnapped them, then he escapes from the soldiers. Later, Abby returns to where Carlos was killed and gets the money that was hidden in his jacket.

LONG VERSION:
A pair of American missionaries, Roy Nassir (Woody Harrelson) and his wife Jessie (Emily Mortimer), have just completed a mission trip in China. Roy, a train enthusiast, decides they will take a trip on the Transsiberian Express from Beijing to Moscow, a trip that will take 8 days, before they head home. They soon meet their cabin mates: Carlos Jimenez (Eduardo Noriega) and his girlfriend Abby Brunell (Kate Mara). Roy quickly befriends them, but Jessie doesn’t care for Carlos. Despite this, he does show off his collection of rare matryashka dolls to her. During a stop in Irkutsk, Roy gets off the train to see an old steam engine, but doesn’t return in time. Jessie decides to get off at the next stop in Ilanskaya to wait for Roy, but Carlos and Abby get off as well, saying she’s not safe traveling alone. They get hotel rooms to spend the night, and while there, Jessie says that she’s just seen dolls similar to the ones Carlos has in his bag. This upsets Abby because they had problems with customs involving the dolls and Carlos said he’d stop collecting them, but he didn’t. After Abby has gone to bed, Jessie asks Carlos to not involve Abby in whatever it is he is doing.

The next morning, Carlos goes to Jessie’s room to use her shower, since the one in their room isn’t working. At that time, Jessie is summoned to the front desk, leaving Carlos alone in her room. She gets a message from Roy that he will rejoin her at the station in Ilanskaya around 4:30 pm. While they are waiting, Carlos convinces her to join him on a trip into the wilderness (Abby is still asleep). Jessie, an amateur photographer, gets her camera and they head into the woods, eventually coming across an old church. He constantly hits on her until she finally relents and they begin kissing. At this time, the roof of the church collapses, and Jessie sees this as a sign and decides to stop. Carlos then calls her a tease and tries to force himself on her. He ends up chasing her around the church until Jessie hits him several times with a fence post. Unfortunately, the last hit was to his head and it killed him. A scared Jessie returns to the hotel to check out, then runs to the train station where she reunites with Roy and they get on the train, leaving Abby behind in Ilanskaya.

Roy then introduces Jessie to their new cabin mate, Ilya Grinko (Ben Kingsley), a narcotics officer traveling to Moscow from Vladivostok. He was there investigating the murder of a man who worked for a powerful Russian drug lord, and the drugs he was in possession of at the time had been stolen, along with some money. Over dinner, Grinko tells them about his job, and that sometimes heroin can be transported in items such as matryashka dolls. While Roy wonders if Carlos and Abby were smuggling drugs, Jessie now knows Carlos definitely was. Back in their cabin, Jessie finds Carlos’ dolls in her bag, and quickly figures out that he put them there when she went to the front desk. She tries to get rid of them several times, but is unsuccessful. After Roy finds the dolls in her bag, she tells him everything that happened in Ilanskaya, except for the part where they went to the church and she killed Carlos. They go to Grinko and repeat their story, then give him the dolls. While he thinks Jessie is hiding something, he does believe them when they say that they had nothing to do with the smuggling, but he does want to know more about Carlos and Abby.

The next day, Roy and Jessie wake up and discover that the rest of the train cars and passengers are gone. Only Grinko and his partner Kolzak Yushenkov (Thomas Kretschmann) are on the train with the missionaries, along with the train’s engineer. They got rid of the rest of the train because they want to know what Jessie is hiding. They then stop the train in the middle of nowhere and force Roy and Jessie off the train and march them to an abandoned military base. Once there, they see Abby being tortured. Grinko explains that he and his partner are on the payroll of the Russian drug lord that Carlos and Abby also worked for, and he was ordered to get back the drugs and money they stole from him. Thanks to Roy and Jessie, he has the drugs back, but he is torturing Abby about the money. He tells them that Abby is not the good girl Jessie thinks she is. Abby recruited Carlos and it was her idea to cheat the drug lord. She also killed the man in Vladivostok, but Jessie doesn’t believe any of it. Later, Roy and Jessie are able to get away from Grinko and Kolzak and make it back to the train. They encounter the engineer, and after Roy knocks him out, Jessie pushes him off of the train. Roy, who knows how to operate a train, gets it started and they attempt to get away.

They don’t get far before Grinko and Kolzak catch up to them, knocking out Roy in the process. While interrogating Jessie at gunpoint about Carlos’ whereabouts, she admits to killing him, but Kolzak doesn’t believe her. Just then, the train collides with an Army transport train. Grinko kills Kolzak, and tells the soldiers that he just rescued the two missionaries from a hostage situation, and Kolzak was the kidnapper. Jessie tries to tell them that he is lying, but none of the soldiers understand English. As she and Roy are led away, Grinko escapes into the nearby forest. Now in Moscow, Roy and Jessie are told by US officials what they know. Carlos was a career criminal and Abby was innocent, and thanks to a photo Jessie took of Grinko and his associates at the military base, they can soon shut down the drug lord and his operation. They sign statements saying everything they said was true, but Jessie never tells them she killed Carlos nor where his body is. Before they head home, Jessie tells Roy that she wants to talk to Abby in the hospital. While the conversation is not heard, it’s implied that Jessie told Abby about what happened to Carlos.

The movie ends back at the old church in Ilanskaya. Carlos’ body is still there, covered in several inches of snow, when Abby shows up. She tears open his jacket and finds the stolen money he was carrying. She takes the money, then walks away without looking back at his body. It appears Grinko was right about her not being a good girl. 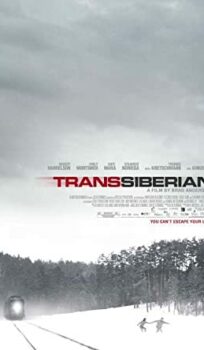