SHORT VERSION:
After being overwhelmed by the kindness of Paradise’s residents, the Firpos decide to return the money to the bank. When that fails, they drop it off anonymously at Father Gorenzel’s house. They are then nabbed by the deputies Ed and Clovis and brought to the Anderson’s house, believing that they conspired with the Firpos to rob their own bank.

When they get there, they find the Andersons, Sarah, the brothers’ mother Edna, and the police chief’s son Timmy being held hostage by Vic and Caesar, and they are all taken hostage themselves. The Firpos eventually admit that they robbed the bank, but they had given the money to the church. A short time after that, FBI Agent Peyser – who had followed Ed and Clovis – then shouts out over a megaphone that he and his men (as well as the town’s police) have the place surrounded, and Timmy knocks out Caesar and shoots Vic when they try to escape. The FBI and police move in and collar Vic, Caesar, Ed, Clovis, and the Firpos. The former two are sent back to their prison in New York while the others are taken to the police station, and Sarah visits Father Gorenzel and sees that the Firpos did give the money to him.

Peyser tries to get someone present to finger the brothers as the bank robbers, but surprisingly, the Andersons and many of the town’s residents who have come to the station cover for the Firpos, and Sarah and Father Gorenzel show up with the money. Knowing that he doesn’t have a case anymore, Peyser tells the Firpos that he knows they committed the crime, but he hopes they have realized that they are getting the break of a lifetime, so they’d better not blow it.

Alvin and Dave return to New York with Edna, but Bill stays in Paradise to be with Sarah.

LONG VERSION:
As the Firpos are recuperating in a diner following another failed attempt to get out of Paradise, Bill (Nicolas Cage) – overcome by his conscience after experiencing the non-stop kindness showered on him and his brothers by the townsfolk – decides to return the stolen money back to the bank. Alvin (Dana Carvey) supports his decision, but Dave (Jon Lovitz) doesn’t, and he tries to make Bill understand that he is still a wanted man back in New York. Alvin then reveals to Bill that he has his wallet, and that the whole story about the cops in New York searching for him was just a lie in order to get him to come and do the robbery with them. Dave then admits that the cops who came to Bill’s restaurant were not after Bill; he had called saying that there was a sniper on the roof. Bill angrily leaves them, but when he starts looking for a ride back into town, he comes across Vic (Vic Manni) and Caesar (Frank Pesce), who are searching for Alvin and Dave and have their mother Edna (Florence Stanley) tied up in the trunk of their Cadillac. Unaware of who they are, Bill hitches a ride with them. Alvin and Dave see this and try to stop Bill, but the car takes off before they can reach him.

As he chats with Vic and Caesar, Bill casually shows them a picture of his mother, prompting Vic to draw his gun. Bill gets out and escapes Vic’s bullets, and the duo quickly flee when Caesar tells Vic that the cops are nearby. Alvin and Dave then arrive with their stolen horse-drawn cart and collect Bill and head to the bank, and Bill asks his brothers if they had something to do with those guys that just tried to kill him, but they won’t fess up. Their attempt to break into the vault and put the money back into it ends with them setting off the alarm, so they get out of there before the cops show up and end up anonymously dropping the money off at Father Gorenzel’s (Gerard Parkes) house. However, as they leave, they are caught by the dimwitted deputies Ed (John Ashton) and Clovis (John Bergantine).

Ed and Clovis take them down to the Anderson’s house, believing that they were in cahoots with the Firpos to rob their own bank. They pass by the bank along the way and are spotted by FBI Special Agent Peyser (Richard Jenkins) and the cops, and knowing that Ed and Clovis seem to always be showing up whenever there is a problem, Peyser follows them. Once Ed and Clovis stop at the Andersons and get the Firpos out of their car, we see that Vic and Caesar’s Cadillac is already there. After Peyser mentions that he recognizes that Cadillac from somewhere, an agent who is with him tells him of a report received over the wire that night about two escaped convicts driving in a Cadillac with New York license plates, so he calls for his backup as well as Chief Burnell (Sean McCann) and his cops. Ed goes inside the house first and finds Edna, the Andersons, Sarah (Mädchen Amick), and Burnell’s son Timmy (Paul Lazar) in the living room, but then he gets knocked out by Caesar, and he then disarms Clovis and brings him and the Firpos inside, and Vic reveals himself afterward.

Vic points his gun at Edna and demands for the stolen money, forcing the Firpos to admit to the Andersons that they had robbed the bank, and they tell Vic that they gave the money to the church. Peyser’s help arrives, and after Peyser takes a quick glimpse of what is happening inside, he tells his agents and Burnell about it and soon announces over a megaphone that the FBI is here and the place is surrounded. Edna blames Vic for all of this, saying that she never would’ve let her sons come to this town if it wasn’t for his letter to Alvin and Dave asking them to convince Sarah to come visit him, but Vic replies that he never wrote a letter. Dave is then exposed as being the one who wrote it, another lie to get Bill to come to Paradise. As Vic and Caesar plan to escape, Timmy fights back, knocking out Caesar and shooting Vic. The agents and cops then come in and collar Vic, Caesar, Ed, Clovis, and the Firpos.

Peyser has Vic and Caesar sent back to their prison in New York, and the others are brought to the police station, with many confused townsfolk coming in after them. Meanwhile, Sarah pays a visit to Father Gorenzel and sees the stolen money, and knows now that the Firpos were telling the truth about it. She meets Cliff (Donald Moffat) outside and says that they ought to forgive the Firpos, and then she apologizes to him for not telling him that she was Vic’s daughter. He replies that it wouldn’t have mattered if she did, and hugs her.

Peyser asks Hattie (Angela Paton) and then Timmy if the Firpos robbed the bank, but they both deny it. Ed then points out that the Firpos bought three ski masks from his store a half-hour before the robbery and questions where they are now, but Alvin produces them to shut him up. Peyser then tells the brothers that all of the evidence points to them, and demands to know where they were at the time of the robbery. Sarah then comes in and says that they were Christmas shopping with her, which Cliff, Hattie, and the other townspeople corroborate. Father Gorenzel then shows up with the stolen cash in a box, and says that somebody just left it on his doorstep. Knowing that he doesn’t have a case anymore, Peyser tells the brothers that he knows they’re guilty, but he hopes they have realized that they’re getting the break of a lifetime, so they’d better not screw it up.

The next morning, the Firpos prepare to take a bus back to New York with their mother. Sarah shows up to see Bill off, but he soon decides to stay in Paradise to be with her. After they kiss, they wave goodbye to Edna, Alvin, and Dave. 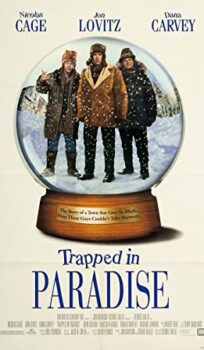