POOPER
Travis reveals to Burt that he is his son, the result of a one-night-stand.  Burt, Travis, and the locals use lightning from a thunderstorm to destroy the last Graboid and it’s egg.

LONG VERSION
Burt Gummer (Michael Gross) is now the host of survivalist-based reality TV series.  He meets Travis (Jamie Kennedy), a self-described “big fan” and hires him to be his new cameraman.  They are then approached by Erich Van Eyk, who works for the South African Wildlife Ministry, to capture Ass Blasters there.  Once Erich agrees to fund their videos for the next three years, Burt and Travis are on the next plane to South Africa.  Upon arriving, Burt discovers his artillery has been confiscated by South African customs.  Erich tells him that there are weapons at a nearby nature reserve, but Burt sees they are mostly tranquilizer guns and older weapons.  Before going on the hunt, Burt and Travis meet Dr. Nandi, who runs the reserve, and her daughter Amahle, as well as the reserve’s helicopter pilot Dan.  They also meet Johan, who handles security at the reserve, but he doesn’t seem to like the “monster hunters”.

At a nearby dig site, two paleontologists discover the fossilized remains of a Graboid, but they are soon killed by an unseen creature.  When he sees the fossil, Burt realizes these Graboids are larger and leaner than the ones back in Nevada.  That night, an Ass Blaster attacks the reserve, killing an employee.  Burt orders the reserve evacuated, then he, Erich, and Johan go after the Ass Blaster.  Travis, who was reprimanded by Burt for being with Nandi instead of preparing for the hunt, is ordered to remain behind to help with the evacuation.  The trio track the Ass Blaster to a cave, which kills Johan before Burt is able to kill it.  Burt then sees the cave is the site of a nest, with an unhatched Graboid egg.  Erich then pulls a gun on Burt and demands he hand over the egg.  Erich is not with the Wildlife Ministry, but actually a poacher who planned on selling the Ass Blaster on the black market, but the Graboid egg will have to suffice.  Burt is placed in the cage they brought to capture the Ass Blaster and Erich drives off.

The next day, Travis finds Burt in the cage and they head back to the reserve.  But Travis’ truck hits a rock and severs the fuel line, forcing them to walk the rest of the way.  Soon they find what’s left of Erich’s truck, and a bloody Erich running from a Graboid, still carrying the egg.  The Graboid gets the egg and goes back to the cave, but then it’s tentacles detach and go after Erich.  Burt is able to destroy one of them, but the other grabs Erich long enough for the Graboid to kill Erich.  Burt and Travis now know that not only are the Graboid’s tentacles able to detach, but the cave is not just a nest but a hive.  While Travis goes to investigate the cave, Burt is able to get in contact with Dan, who flies to their rescue.  After he lands, the Graboid attacks Dan and swallows him.  Burt and Travis get to the helicopter, and use it’s rocket launchers to blow up the cave, destroying all of the eggs inside it.  Dan then shows up again, having been spat out by the Graboid.  The three then fly off back to Travis’ truck, where he fixes the fuel line and uses Dan’s spare fuel to refill the truck.  Dan flies off to refuel the helicopter while Burt and Travis drive back to the reserve.  Meanwhile, Nandi, Amahle, and Baruti, one of the reserve’s employees, are constantly fighting off Graboids and Ass Blasters, wondering why their reserve is being singled out for attack.

While driving to the reserve, Travis tells Burt that he’s not just a fan, but also his son:  the result of a one-night-stand Burt had in Florida 40 years ago.  He found Burt through his TV program, and wanted to be like him.  Now at the reserve, they see it’s abandoned and proceed to the village where everyone was evacuated to.  In the village, Nandi sees a Graboid egg in Amahle’s bag, and now knows why they are being targeted.  She, Amahle, and Baruti are then attacked by the tentacles, and they corner Amahle, still with the egg.  Burt and Travis arrive, and they and Baruti are able to rescue Amahle from the tentacles.  As a thunderstorm approaches, Nandi has the idea to use the lightning to kill the last remaining Graboid.  With Travis distracting it with a motorcycle, the locals use construction material to build a trap and lightning rod, using the egg as bait.  With the storm on top of them, Travis lures the Graboid to the trap, which is then struck by lightning, killing the Graboid and destroying the egg.

The movie ends with everyone celebrating, while Travis and Burt agree to continue working together on his reality show. 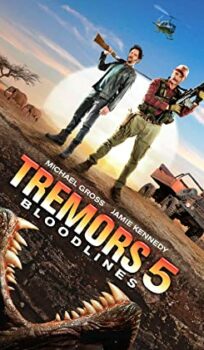