This made-for-TV movie consisted of three short stories, starring Karen Black in each story. Most people only remember the last installment with the evil Zuni doll chasing a terrified Karen Black through her apartment, while also terrifying millions of viewers across the country.

“Julie”
College student Chad (Robert Burton) convinces his English professor Julie (Karen Black) to go on a date with him. He spikes her drink, she passes out, and he takes compromising pictures of her. Showing the photos later, Chad blackmails her to have sexual encounters with him, and she reluctantly agrees. After a few weeks of this, Julie reveals that she actually seduced Chad, and she was the mastermind behind it all. He realizes too late that Julie has poisoned his drink. He dies, she hides his body, and there is a knock at her door. Another college student has arrived, another victim to play her little game.

“Millicent and Therese”
Black plays two characters in this short story of sibling rivalry: Millicent, a repressed, home-body brunette; and her sister, Therese, a free-spirited, seductive blonde. Believing that her sister is evil, Millicent introduces a voodoo object into Therese’s world to cause her grief. Millicent’s doctor (George Gaynes) stops by to check on her, but he instead finds Therese’s dead body. Here we learn that Millicent and Therese were one and the same. The woman suffered from multiple personality disorder brought on by childhood trauma involving her parents. Therese’s murder was actually Millicent’s suicide.

“Amelia”
Amelia lives by herself in a high-rise apartment. She returns home from shopping with groceries and a package containing a Zuni fetish doll. The ugly thing has a spear, razor-sharp teeth, and a gold necklace. According to the accompanying scroll, the necklace keeps the evil spirit within the doll at bay. Of course the necklace falls off, the evil spirit animates the doll, and a cat and mouse game ensues as Amelia tries over and over to destroy the attacking doll. She eventually traps it in the oven, where she burns it alive. When she thinks all is clear, she opens the oven door, and the evil spirit engulfs her. We next see a subdued Amelia call her over-bearing mother, inviting her to come over to her apartment where Amelia waits, sitting in the corner, stabbing the floor with a large kitchen knife, and she smiles. Amelia now has the same razor-sharp teeth as the Zuni doll whose spirit now inhabits her body. 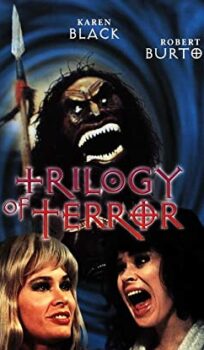