Poppy and Branch learn that there are other Troll lands made up of other types of music. They live on the Pop Troll Island, while the others are Rock, Classical, Funk, Country, and Techno. Queen Barb of the Rock Trolls wants to collect the six strings from every Troll clan to make sure only rock music prevails. Poppy, Branch, and Biggie set off on an adventure to stop Barb from destroying other kinds of music. Meanwhile, Cooper sets off on his own journey after learning that there are other giraffe Trolls like him.

Poppy and her friends team up with a Country Troll named Hickory to stop Barb. They are found by the Funk Trolls, who are actually Cooper’s real family. They reveal that it was the Pop Trolls who tried to claim all the music for themselves, forcing the other Troll leaders to take their strings and flee. Barb captures the Funk Trolls, and Poppy and Branch split up after he tells her that she won’t listen to anyone who tries to tell her not to keep going. Hickory then turns out to be part of a Yodeler duo of Trolls who were sent by Barb to get Poppy’s string. She then shows up and captures Poppy after succeeding in getting the other Trolls and their strings.

Barb puts on a rock show where she unites the strings to create the Ultimate Power Chord. Branch and the other Pop Trolls come to help Poppy, but Barb turns him and the other Troll leaders into Rock Zombies. She nearly does the same to Poppy, but she fakes it by covering her ears with gumdrops, and then destroys Barb’s guitar, and also the strings. All the Trolls then create a unique sound with their own individual beats and rhythms. Barb joins in as well, and the Trolls all make peace.

The Trolls accept that their differences make them unique. 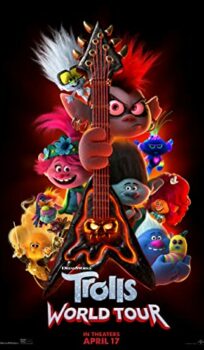