Harry (Arnold Schwarzenegger) kills all the bad guys, single-handedly, using the machine gun from the F-16 he took to rescue his daughter, Dana (Eliza Dushku), who was being held hostage by the terrorist leader, Aziz (Art Malik).  Aziz is the last to die, as, during a climactic struggle, he gets tangled in a rocket, which Harry fires against a helicopter with some remaining terrorists on board.  Harry, Dana and all the other main characters survive.

It then jumps to one year later, as the Taskers are together at home, playing Thumb War; suddenly, the phone rings, Helen (Jamie Lee Curtis) answers, and then says: “We’re on”.  Both she and Harry are sent to another National Security mission, in which they meet again with “Carlos”/Simon (Bill Paxton), trying to pick up another woman.  They give him a good scare, and he pees on himself and runs away.

The movie ends, with Harry and Helen doing the tango, while Gib (Tom Arnold) tries to convince them to focus on the mission, from the van outside.  Some credits roll; then, Gib declares, upset, that he wants to switch places with Harry next time.  And that’s it. 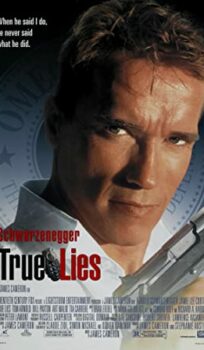