Tsotsi (Presley Chweneyagae) returns the baby boy to his wealthy parents, and is immediately arrested by the Police afterwards.

There are, also, two other alternate endings, available on the DVD:
-One, in which, after he knows he is arrested, he gets his hands in his pocket, an officer believes he tries to retrieve a gun, alerts everyone, and Tsotsi is shot and killed.  It turns out he was trying to get a crystal baby bottle, which drops to the floor and breaks.

-And another one, in which everything happens just as in the previous ending; however, Tsotsi survives his gunshot wound, and manages to escape by jumping a hedge and running off. 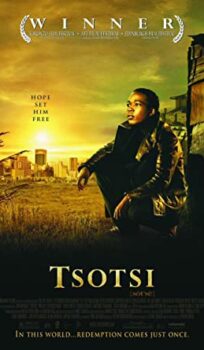