Through a series of misunderstandings, a group of vacationing college kids come to believe that the hillbilly duo of Tucker (Alan Tudyk) and Dale (Tyler Labine) kidnapped Allison (Katrina Bowden) and plan to kill her.  However, in actuality, Tucker and Dale are two kindhearted people, who saved Allison from drowning.  In fact, Allison starts to get to know Dale (who has a crush on her) and begins to bond with him.

The college kids, lead by Chad (Jesse Moss), who seems to hold a particular biased hatred towards hillbillies, try to one-by-one to “save” Allison, only to die in various gruesome (and accidental) ways.  At one point, Tucker is captured and hung upside down by Chad, who cuts off Tucker’s fingers and sends them to Dale.  Dales runs into the woods to save Tucker and successfully does so, even though he barely survives getting impaled by a booby trap in the process.

While Tucker and Dale are gone, Chad, and another of the students, sneaks into their cabin and finds Allison.  Allison tries to explain the misunderstanding, but Chad and the other student believes that this is just her suffering from Stockholm Syndrome and Chad begins to get angry at the thought that Allison is falling in love with a hillbilly.  Tucker and Dale return and they begin to clash with Chad, however Allison tries to sit them down, so they could explain their sides of the story.  Chad explains that his hatred of hillbillies comes from how his father was killed, and his mother raped and tortured, by a hillbilly during a massacre that occurred in the same area 20 years previous.  Chad’s mother survived, but she was institutionalized by the time he was born.  The heart-to-heart is interrupted by the remaining college students barging into the cabin. The resulting carnage results in the deaths of the rest of the students, as well as the cabin blowing up (when the fire from a thrown Molotov cocktail hits some gas cans).

Tucker, Dale, and Allison make it out of cabin shortly before it explodes.  However, right as everything felt safe, Chad (now horribly burnt) emerges from the cabin, with a hatchet in hand, and starts chasing after the three.  The three get into Tucker and Dale’s truck and they drive away, but Dale crashes into a tree (and once again barely misses getting impaled by the branches).  When Dale comes to, Allison is gone and Tucker is on the ground bleeding.  Tucker explains that Chad took Allison away, injuring Tucker in the process, and Dale goes off to rescue her.

Dale tracks Chad and Allison to a lumber mill, where Chad has her tied to a saw.  Dale arms himself with various tools found in the shed, including a chainsaw, and goes into the lumber mill.  Dale and Chad fight and Dale (accidentally) frees Allison with a missed hatchet throw.  Dale and Allison run to hide from Chad in the attic and they find an old newspaper, which reported the capture of the killer of the massacre.  The killer looks a lot like Chad and Dale and Allison realize that the killer was Chad’s real father. Suddenly, Chad barges in, now armed with the chainsaw, and he is confronted with the revelation of the truth (and the fact that he is half hillbilly).  Chad refuses to believe this and comes toward Dale and Allison with the chainsaw.  However, Dale finds a box of chamomile tea and, remembering an earlier revelation that Chad is allergic to the tea, throws the leaves into Chad’s face, resulting in an asthma attack.  Dale begins to say that Chad will be okay if he gets to his inhaler, however Chad backs out the window to his, apparent, death.

In the aftermath, a new reporter states the deaths, which were initially believed by police to be a mass suicide, were now being attributed to, the “deranged killer”, Chad.  Tucker survived his injuries and is now in hospital, with his fingers having been found and reattached, even though one of them looks suspiciously feminine.  Dales ends up going on a bowling date with Allison and they end up happily ever after (despite some commotion beginning amongst the other hillbilly bowlers in the alley). 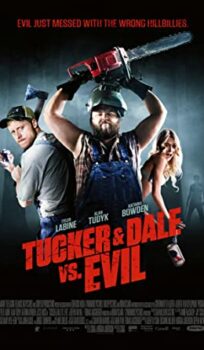